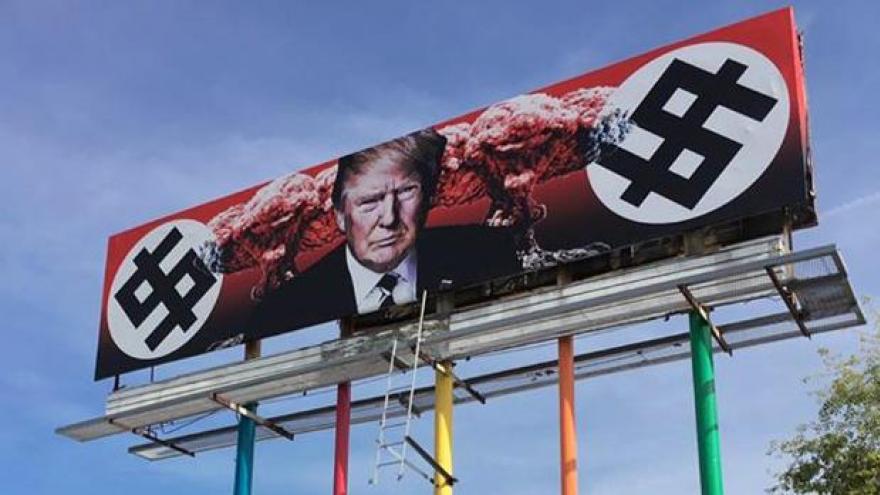 Karen Fiorito tells CBS Los Angeles that she was commissioned by a company for the local arts in Phoenix to create the billboard.

Since the Trump billboard went up Friday, the 25-year-old artist said she has received both positive and negative feedback.

“Tons and tons of positive feedback,” she said. “People either love it or they hate it. A lot of people have defended me online and offered to give me money to keep it up.”

But the feedback hasn’t all been positive. In fact, Fiorito says she’s received a few death threats.

“There have been a couple of people who have said they will come and get me, or that I should be sleeping with a gun underneath my pillow,” she said. “They are very determined to get under my skin.”

As Fiorito explains, the billboard encapsulates a couple of messages.

One side of it depicts President Trump’s face, flanked by mushroom clouds and dollar signs mimicking Nazi swastikas, according to the Associated Press, which she says “represents global destruction, warfare and annihilation of the planet.”

The dollar swastikas, she said, represent “corporate power and greed and how our society has become all about money and corporatism.”

“To me, it says power, money, and dictatorship,” she told CBS Phoenix affiliate KPHO-TV.

The other side of the billboard shows the word “Unity” with five hands spelling out the word in sign language, according to the AP.

“I wanted to have a positive or a flip side to the billboard,” she said. “I wanted something to be a call to unity and a call for people to come together to resist what’s happening … if we become united, we can defeat anything.”

Fiorito has been an artist her entire life. She earned a master’s degree in arts from Arizona State University, and says the billboard is expected to remain up through the duration of Trump’s presidency.

“If things change or get worse, we might update it,” she said.

But for now, she says, she plans to lay low.