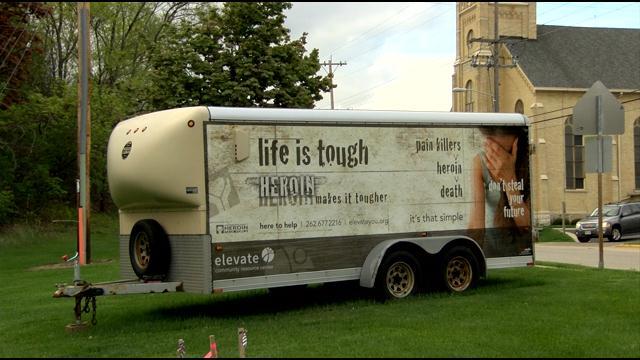 Its a big city drug that's gaining ground in the small towns of Wisconsin.
In fact, the Department of Justice says the number of heroin cases has steadily increased in Wisconsin throughout the last three years.

Washington is a county of many small cities and towns and officials say, its location between Milwaukee and Green Bay makes it a hot spot for the drug trade. That's exactly why the heroin task force and the community group \"Elevate You\" have launched a rolling billboard to get the community talking.

Naab says people would be shocked if they knew how big the drug trade really was in Washington County.

\"I'm aware of what we've seen medically and the calls we've gotten for people that have been overdosed,\" Naab said.

But he wants the community to know, saying anyone, young or old, can easily get hooked.

\"you sprain your back or shoulder or knee, they're going to give you something to cope with the pain,\" he said.

Because its a slippery slope between taking pain medications and using heroin.

\"When insurance says we're not paying for it anymore, you're going to look for other sources. And heroin is very cheap,\" he said.

And that's where this trailer comes in. The group \"Elevate You\" wanted to get the message out via billboard, but after a church donated the trailer, the group decided to wrap it up and take their message to the streets.

\"People driving by, going to church, going to the grocery store see the message and its a conversation starter,\" said Ronna Corliss, from Elevate You.

There's nothing in the trailer. It's literally just a billboard on wheels.

\"It's going to last much longer than a billboard and its much more mobile,\" Corliss explained.

But Corliss says it's exactly what Washington County needs.

\"Highways 41 and 45 are  prime locations for transporting drugs,\" Corliss said.

And you can expect to start seeing it in parades, parking lots and roadways from Germantown to Kewaskum.

\"Hopefully the sight of this, reading it, seeing the picture, might just instill in their brain: I need to get help,\" said Naab.

The trailer was in Boltonville Sunday and will stay there for a week until it's transported to Allenton.


You can find out more information by liking Elevate You on Facebook or by visiting their website: http://www.elevateyou.org/