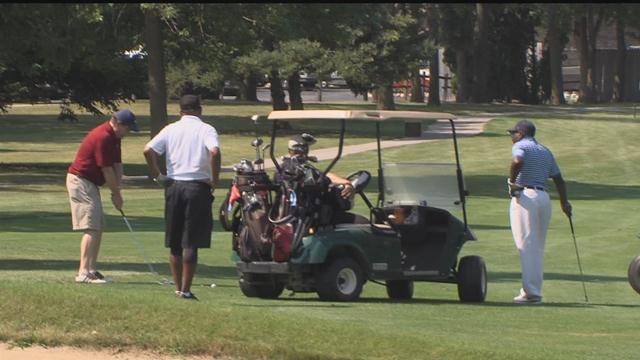 The Fellowship Open Golf Outing was held for the 15th straight year Friday at the Silver Springs Country Club.

The event's principal objective is to work and support organizations which are having a meaningful and demonstrable difference on the lives of the youngsters in the City of Milwaukee.

The activities that the Fellowship Open has supported have affected literally thousands of youngsters in Milwaukee in all aspects of their development, including the arts, technology, job skills and job readiness.

Each year a group of youngsters are invited to participate at the event and meet with the honorary chairs. In addition, a number of students are provided personal computers and i-pads for their use and development.

This year a group of young people also got a tour of Whistling Straits ahead of the PGA Championship and some appeared nationally on the Golf Channel.

The Fellowship Open also selects three honorees each year who epitomize the message and commitment that the Fellowship  Open seeks to communicate to youngsters, which is that there are no limits to what can be achieved. You only need a commitment to your future and a belief that you can do something perhaps never before contemplated.

Each year, the Fellowship Open honors individuals who have had a dramatic impact on the improvement of lives of people in America, with a particular focus on those who have created more opportunities for the nation’s youth.

CBS 58's Michele McCormack is proud and humbled to have been a part of the event for nearly a decade.

Attached are some of her reports from the Silver Springs Country Club.