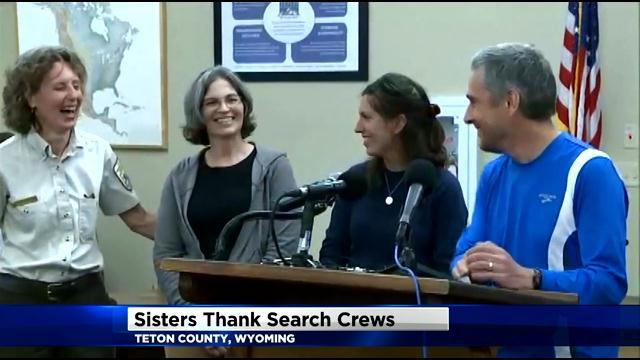 The three sisters who went missing in Wyoming on their hiking trip, that started June 28, said faith got them through the search and rescue. They held a press conference with their parents to thank everyone who helped find them.

\"I was truly overwhelmed when I saw the sight getting off the helicopter. I realized there was no way people were giving up on the search. And that had crossed my mind a couple times,\" said Erin Andrews-Sharer.

Megan, Erin, and Kelsi Andrews-Sharer got lost trying to find Horse-Creek trail, according to Megan.

The girls were spotted, on July 9, when Kelsey Andrew-Sharer was wearing her white rain coat and heading up to a fire signal they had made.

Thankful to communities for support

Eric Andrews-Sharer, their father, said he was unaware of the media and social media attention to the search until July 9.

He said he was thankful for the community in Jackson Hole and in their hometowns for the support. He said numerous people volunteered with dogs and horses from Idaho and Wyoming to help the search efforts.

Eric said he was,also, thankful for the churches they attended holding vigils and praying for the girls. Eric said faith was important to the family, and him and his wife planned to be at church on Sunday. Erin said faith was got her and her sisters through.

Erin said they took it day by day.

\"I'm glad to be out safe,\" said Megan Andrews-Sharer.

Eric shared he has been camping with his daughters and wife since the girls were early. And he taught them survival skills.

\"The most important thing to do is to stay put. They did all the things you would want your kids to do in a back-country situation,\" said Eric.

The parents hiked the Teton National Forest before they were married and got lost as well.

\"Part of the challenge of Teton National Forest is being very alone,\" said Eric.

Eric and the girls said they wished to not to go into to much detail of what happened while they were missing.

\"We are kind of a shy family and want to return to our normal life,\" said Eric.