And The Oscar Goes To... 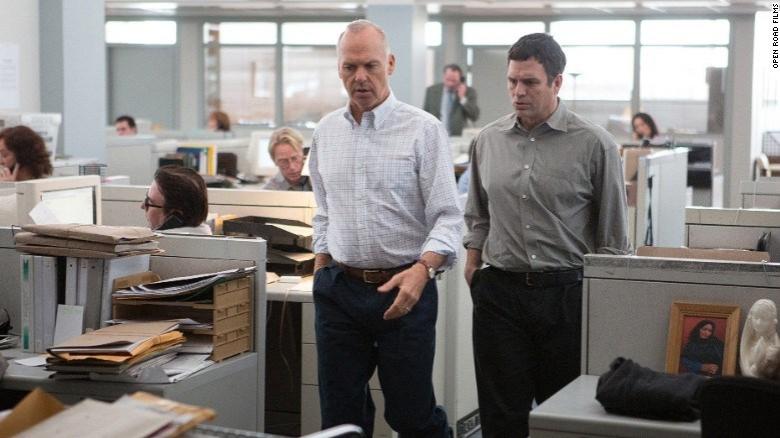 (CNN) "Spotlight" is basking in the golden glow of Oscar.

"Mad Max: Fury Road" may have won more honors at the 88th Academy Awards, leading all films with six. "The Revenant" won some major prizes, including the first Oscar for actor Leonardo DiCaprio.

But when the last award of the evening was read, it was the little film about Boston Globe investigative reporters digging into a sex abuse scandal involving Catholic priests that was left standing.

"This film gave a voice to survivors," producer Michael Sugar said. "And this film amplifies that voice, which we hope will become a choir that will resonate all the way to the Vatican."

It was one of just two awards "Spotlight" took home. The film also won for Tom McCarthy and Josh Singer's original screenplay.

But until that moment, it looked like "Revenant," about a vengeful trapper in the 1820s, was going to go all the way.

Alejandro González Iñárritu notched his second straight Oscar in the directing category; he's the first person to pull off that feat since Joseph L. Mankiewicz in 1949-50. The film's Emmanuel Lubezki also kept a streak going, winning his third straight Oscar for cinematography.

But the big story was DiCaprio, who finally won an Oscar with his fifth acting nomination.

After taking some time to thank Iñárritu, co-star Tom Hardy and director Martin Scorsese, among others, DiCaprio put in a plug for environmentalism.

"Climate change is real. It is happening right now; we needed to go to the tip of South America to find snow. ... It is the most urgent threat facing our entire species," he said. "We need to support leaders around the world who speak for indigenous people, for humanity, the voices who have been drowned out by the politics of greed. Do not take this planet for granted. ... I do not take this night for granted. Thank you."

Though most awards were expected, given the expertise of close-watching Oscar handicappers these days, the night wasn't without its shockers.

Mark Rylance won best supporting actor for his performance as a Soviet agent in "Bridge of Spies."

The category included Sylvester Stallone, who was widely believed to be the front-runner for his performance as Rocky Balboa in "Creed" -- 39 years after he first played the role in "Rocky."

"Writing's on the Wall," Sam Smith's song from the James Bond film "Spectre," won best song -- an announcement that came not long after Lady Gaga brought the house down with a performance of her nominated song, " 'Til It Happens to You."

After a streak of technical awards to "Mad Max," "Ex Machina" won for visual effects.

Ennio Morricone, the legendary composer of such film scores as "The Good, the Bad and the Ugly" and "The Untouchables," finally won an Oscar, his first in six nominations. It was for Quentin Tarantino's "The Hateful Eight."

And, in perhaps the biggest shock of all, the show was rather brisk, lasting just over 3½ hours. That's actually longer than some shows of recent years, including the 2011 show with James Franco and Anne Hathaway, but given the program's propensity for pushing four hours, it's not something to be taken for granted.

Perhaps that was at least partly due to the host, the no-holds-barred Chris Rock.

Rock wasted no time in taking on #OscarsSoWhite and diversity issues that had been in the news since the nominations were announced in mid-January.

After the obligatory montage of the year's movies, Rock came out and said he'd counted at least 15 black people in the video -- and, just like that, he was off.

"If they nominated hosts, I wouldn't even get this job," he said. "You'd be watching Neil Patrick Harris right now."

Noting the lack of black nominees through most of Oscar history, he pointed out that in the '60s, "black people did not protest because we had real things to protest at the time. We were too busy being raped and lynched to worry about best cinematography."

And "In Memoriam," the yearly segment of people who had passed away in the previous year, would get an addition, Rock said.

"In the In Memoriam package, it's just going to be black people shot by the cops on the way to the movies."

Some of his lines earned gasps from the audience, and the New York Daily News believed he had gone too far.

But his stint appeared to have gone well overall.

Rock went back to the Magic Johnson Theaters in Compton to ask African-American moviegoers about the year's nominated films. Almost none of the patrons had seen them.

And he even helped his daughter sell Girl Scout cookies.

"Inside Out" won best animated feature.

In recent weeks, it appeared that "The Revenant" would top them all. The film featured gripping photography and DiCaprio's intense performance and made a set piece of a vicious bear attack. It had won some major prizes, including the Directors Guild prize for Iñárritu, and the Motion Picture Academy rarely splits honors between director and picture.

But "Spotlight," which had been quietly collecting honors of its own, came through on deadline.