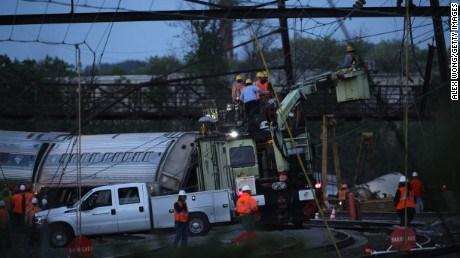 (CNN) Amtrak was spending the weekend installing new speed controls on the section of track where one of its passenger trains derailed near Philadelphia, as investigators examined reports that the New York-bound train was one of three hit by an unknown object shortly before the fatal crash.

The installation of the Automatic Train Control (ATC) system to slow speeding trains follows an order by the Federal Railroad Administration to Amtrak to take immediate steps to improve safety on the busy Northeast Corridor.

The railroad administration also instructed Amtrak to assess the risk of all curves on the corridor where the approach speed is significantly higher than curve speed, and to increase speed limit signage throughout the corridor.

Amtrak said it would immediately implement all three measures. The acting administrator of the FRA, Sarah Feinberg, said Amtrak wants to resume Northeast Corridor service at full capacity by Monday or Tuesday, and that these measures must be taken first.

Speed controls at the crash site

The Amtrak train that crashed was traveling from Washington to New York when it derailed Tuesday night on the curve at Frankford Junction, just north of Philadelphia. Eight people were killed and more than 200 were injured. Seventeen people remained in the hospital Saturday.

\"The rationale behind the decision not to install there (which was made in the 1990s) is that the drop in speed (from 80 to 50) is considered within the risk envelope,\" Amtrak explained to CNN via email. \"Going the other way, the decrease in speed is much greater going into the curve (110 to 50), so that's why ATC was installed there.\"

The train that crashed this week, Northeast Regional Train 188, was traveling at 106 mph when it entered the curve, the NTSB has said.

\"Had the train been operating at max authorized speed heading into the curve, it would not have come off the tracks,\" Amtrak wrote.

ATC has been in place throughout the Northeast Corridor, the most heavily traveled rail network in the country, for nearly 40 years. The system notifies an engineer if a train is speeding and applies the brakes automatically if the engineer does not respond.

Amtrak is in the process of installing a sharper technology known as Positive Train Control (PTC) on all of its tracks. The PTC system is already in service between New Haven, Connecticut; and Boston, but is in service on only 50 of the 226 miles of track between Washington and New York.

It is not installed at Frankford Junction.

PTC is a programmable system that uses transponders in the tracks to communicate with computers on locomotives. As a train passes over a transponder, it switches the train's onboard radio to the proper channel and helps the train receive the appropriate information about speed restrictions and routes, according to Amtrak.

As with ATC, the system sends a warning to the engineer if the train is speeding and applies the brakes if the engineer doesn't respond.

Congress ordered the nation's railroads to adopt PTC by December 2015 in response to a head-on collision that killed 25 people in 2008 near Los Angeles. The technology is complicated and expensive -- Amtrak has spent $110,0 million since 2008 to install it -- but Amtrak says it is on schedule to meet the end-of-year deadline.

Sumwalt and Amtrak Chief Executive Joseph Boardman said this week's derailment would not have happened if PTC had been in place.

Meanwhile, the National Transportation Safety Board and FBI were investigating reports that the Amtrak locomotive and two other trains were hit by objects just before the crash in the same vicinity, just north of the 30th Street station in Philadelphia.

Much of the Amtrak locomotive's windshield was shattered in the derailment, but Sumwalt said the FBI is examining particular damage to the lower portion.

The assistant conductor on the Amtrak train told investigators she overheard engineer Brandon Bostian say in a radio transmission that the train had been struck by something, according to Sumwalt. Investigators have interviewed Bostian, who suffered a concussion and other injuries, but Sumwalt said he has no recollection of events just before the derailment.

A regional train passing through the same area also suffered windshield damage from an unknown object and had to make an emergency stop.

Southeastern Pennsylvania Transportation Authority police responding to the incident said in radio transmissions, \"It is a train that had a foreign or unknown object make contact, shattering the windshield.\"

The Amtrak train's assistant conductor said she overheard the SEPTA train's engineer say the windshield was either hit by a rock or shot at.

A passenger on the SEPTA train told CNN he heard a loud boom before the train came to a stop, and the engineer, who appeared shaken, told passengers something had hit the train.

A photo of the front of the SEPTA shows a circular crack on the windshield.

Adding to the mystery are reports from passengers aboard an Amtrak Acela train from New York to Philadelphia that something hit and cracked a side passenger window roughly 20 minutes before the Amtrak crash.

\"We heard a very large, really loud slamming or banging sound,\" said passenger Kam Desai, who was sitting one seat behind it on the same side. \"It was very alarming to all the passengers, myself included, and my co-worker that was with me.\"

He saw a \"really large circular kind of impact point on the glass\" that shattered all but the interior pane of glass.\" Once the train arrived in Philadelphia, he said, Amtrak police boarded the train to inspect the cracked window and interview passengers.

\"The conductor made it sound like it wasn't too big of a deal, so we really didn't think anything of it,\" Desai said. But once he heard reports about the Amtrak crash and SEPTA train incident, \"that's when we started to get a little bit more alarmed, knowing that there was something that had gone on, and it seemed like they were pretty connected incidents, or just major coincidences that all three trains in a similar area were, you know -- some sort of issue occurred with all three of them.\"

Investigators are considering all possibilities, including speed, track conditions and human error, as they try to figure out what happened.
Share this article: