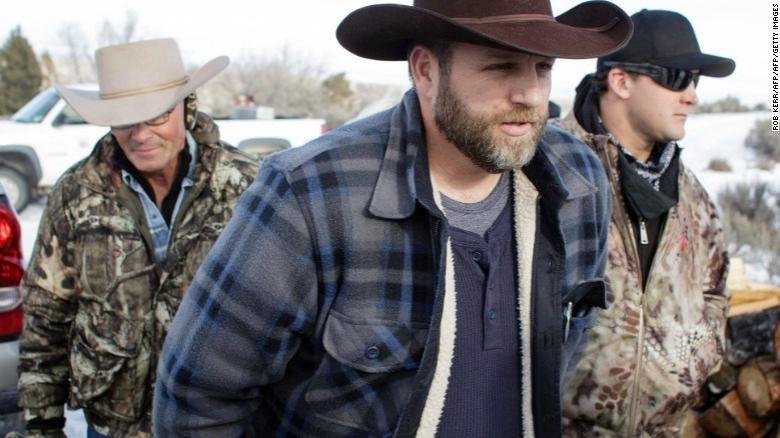 (CNN)Ammon Bundy, leader of the armed protesters who took over a federal wildlife refuge in Oregon, was arrested and one of his followers was killed in a highway traffic stop Tuesday.

Shots were fired, but it's unclear who fired first, the official said. Ryan Bundy was injured, but Finicum died, the official added.

Finicum was one of the most outspoken occupiers who took over the Malheur National Wildlife Refuge near Burns on January 2 to protest federal land policies.

Earlier this month, he said he'd rather be killed than arrested.

"Absolutely ... I have no intention of spending any of my days in a concrete box," he told NBC News. "There are things more important than your life, and freedom is one of them. I'm prepared to defend freedom."

In all, police arrested eight people linked to the armed siege Tuesday: five in the traffic stop on Highway 395; two others in Burns; and one in Arizona.

The two arrested in Burns were Joseph Donald O'Shaughnessy and Peter Santilli.

And protester Jon Ritzheimer, who previously made headlines for leading an anti-Islam protest in Arizona, turned himself in to police in Peoria, Arizona, FBI spokesman Kurt Remus said.

All eight people arrested face a federal felony charge relating to their occupation of the refuge: conspiracy to impede officers of the United States from discharging their official duties through the use of force, intimidation or threats, authorities said.

"It appears that America was fired upon by our government," the occupiers said on the Bundy Ranch Facebook page. "One of liberty's finest patriots is fallen. He will not go silent into eternity."

"I have some sons and other people there trying to protect our rights and liberties and freedoms, and now we've got one killed," he said. "All I can say is, he's sacrificed for a good purpose."Ammon Bundy and others started out protesting the sentencing of Dwight Hammond and his son Steven, ranchers convicted of arson on federal lands in Oregon.

But a march supporting the Hammonds led to the armed occupation of the refuge, with occupiers decrying what they call government overreach when it comes to federal lands.

"The situation in Harney County continues to be the subject of a federal investigation that is in progress," she said. "My highest priority is the safety of all Oregonians and their communities. I ask for patience as officials continue pursuit of a swift and peaceful resolution."