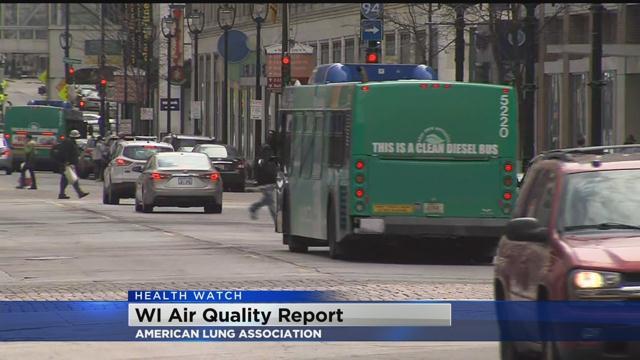 CBS 58 received the results of the new American Lung Association's "State of the Air" report.

Donna Wininsky, Director of Tobacco control and public policy with the ALA of Wisconsin spoke to CBS 58’s Mike Strehlow about the findings.

“The headline is that air quality is getting better but unfortunately we still have work to do,” said Wininsky.

The change of guidelines by the EPA impacts the air quality, according to Wininsky.

The following highlights for Southeastern Wisconsin were included in the 2016 report:

Milwaukee-Racine-Waukesha metro, including Dodge, Jefferson, Milwaukee, Ozaukee, Racine, Walworth, Washington and Waukesha counties reduced its ozone pollution in 2012-2014, but ranked worse than in the 2011-2013 report.

Milwaukee County, WI, the most polluted county in the metro area for year-round particle pollution slightly improved in 2012-2014. The levels continue a gradual decline from a high in 2005-2007.

Milwaukee County, WI, also the most polluted county in the metro area for short-term (24-hour) particles, continued to slightly decrease its unhealthy levels in 2012-2014, the best ever.  This decrease continues the steady trend of fewer days with unhealthy levels of pollution from a peak of 8.5 days in 2000-2002.

Kenosha County is considered part of the metro Chicago/Naperville IL-IN area. That metro area reduced its ozone pollution in 2012-2014. Not enough data was collected to evaluate short-term or year round particle pollution.