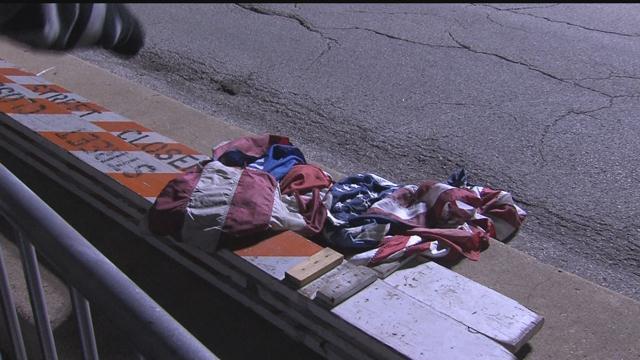 Hundreds of protesters gathered outside the Milwaukee Theatre in the hours leading up to the fourth Republican presidential debate.  Among them were members of a handful of different groups, including immigrants' rights organizations, labor unions, anti-war demonstrators, and those in support of Dontre Hamilton.  Earlier Tuesday, November 10th, the Hamilton family called for protesters to gather after it was announced the U.S. Justice Department would not prosecute Christopher Manney, the former Milwaukee Police Department officer who shot and killed Dontre Hamilton in April of 2014.

During the protests outside the debate, an American flag was lit on fire.  It's unclear who started the fire, or which group they belong.

Milwaukee police quickly put out the fire and removed the damaged flag from the crowd.  Several protesters who were captured on camera standing on other American flags told CBS 58 their flags were confiscated by police.  They were told they would be able to get them back at a later date.

Many protesters could be heard chanting, "We don't support that," during the burning.

It is not illegal to burn a flag in the United States as ruled in the 1990 Supreme Court case U.S. v. Eichman.  The court clarified that it is unconstitutional for a government, whether federal, state, or municipality, to prohibit the desecration of a flag, due to its status as "symbolic speech."