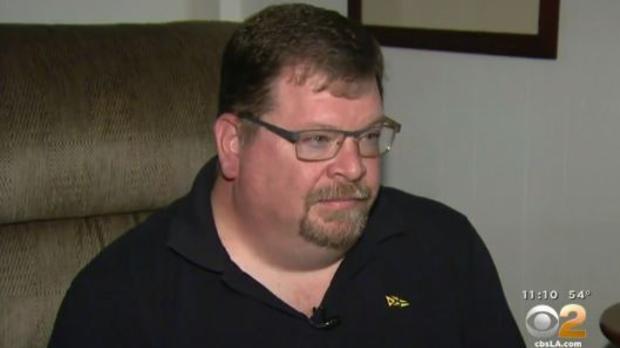 (CBS NEWS) An Orange County man said he is outraged by the way he was treated on an American Airlines flight because he is overweight.

Chris Shelley claimed he was kicked off the plane because he weighs a few more pounds, reports CBS Los Angeles.

"The worst part was being treated as if I was some sort of criminal. Not only a criminal, but a fat criminal," Shelley said.

The Huntington Beach engineer, who said he flies more than 100,000 miles a year, cannot help but wonder "if this is customer service, American Airlines shouldn't be in business," he said.

Shelley said his nightmare began after he boarded an American Airlines flight from Dallas to Orange County on Friday, when an elderly petite woman sat in the aisle seat next to him.

"She was clearly not particularly happy, got up and left and went towards the front of the aircraft," Shelley said.

The retired Marine did not think anything of it until "a young gentleman in a vest with an American Airlines emblem on it turns to me and says: 'Sir! You need to take your things and deplane immediately. Come with me.' I was in shock," Shelley said.

He said the employee told him the woman seated next to him complained he was too big for his seat. "They told me anyone over two inches in the seat cannot sit on the aircraft."

Shelley said he was shocked when the airline did not offer a solution.

"They never once asked me or anyone else if we could switch seats. It was just simply - get off the plane!" He said after begging the employee to ask the woman, who complained about him, to just switch seats. She agreed. He was able re-board the plane.

American Airlines sent him two apology emails. A spokesperson said the company has launched an investigation.