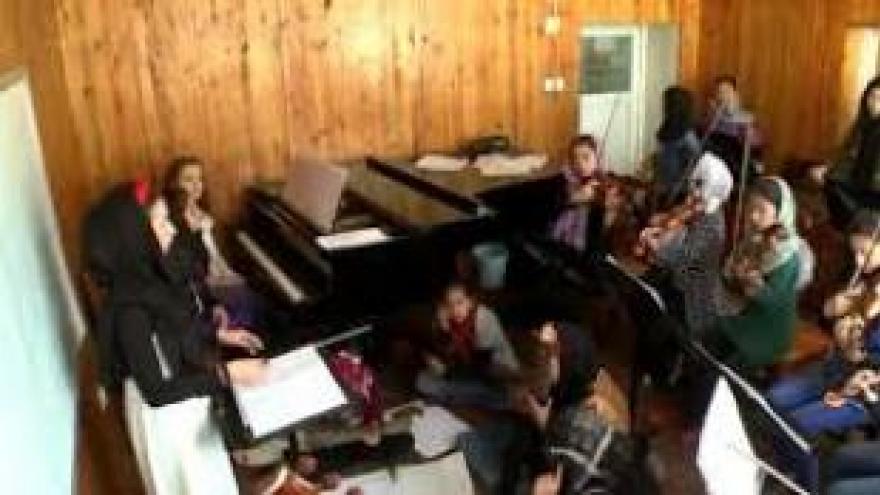 (CBS NEWS) Even death threats can’t stop Afghanistan’s only all-female orchestra from challenging the status quo in their country, where many see music as immoral -- especially for women.

Under Taliban rule in the late 1990s, music was banned in the deeply conservative nation and today, many traditionalists still disapprove of the art.

Made up of students from the Afghanistan National Institute of Music, Zohra -- which gets its name from a goddess of music in Persian literature -- has toured internationally, performing in multiple European countries and at the World Economic Forum in Davos.

But when Nazira returns home to visit her family, she sometimes hides her face, so that the other villagers don’t know she is there.

“They told my father that, if you don’t take your daughter out of school, then we will kill (her). We will not let you come to our village,” she says.

Nazira, like many of the students at the institute, left her family home in order to study in Kabul, either by choice or by necessity. Many other students had been living in orphanages or on the streets of the capital city before they started learning to play their instruments.

Negin left her village to gain access to an education. She ended up in a Kabul orphanage, where the director told her about a nearby music school. She enrolled and started playing the piano, and went on to beome one of the founders of Zohra.

“The people in our province, they’re always saying that whenever we see you, we will kill you,” Negin tells CBS News. “But I’m not scared. I will continue my studies, because if we stay in the home, the new generation will also stay in the home. If we open the door for other generations, it will be good.”

Negin wants to become a professional conductor, but for some young women, music has been a path to other goals.

Zarifa,18, plays the viola, and leads the orchestra with Negin. For her, university has become the priority, after she spent a summer studying law and political science at Yale in the United States.

“One day, I was just playing my viola and I realized that, Zarifa, you can do more than being a viola teacher at the Afghanistan National Institute of Music,” she says. “You can be a lawyer, you can study music business in the future, and you can work, not just for music, but for all the artists in your country.”

She says it was music that gave her the vision and discipline to pursue her ambitions.

“For the world,” Zarifa says, “Zohra orchestra is trying to tell them that, if in Afghanistan (the) Taliban exists, ISIS exists, negative things exist, violence against women exists. There are a lot of beautiful things that exist that have been hidden behind all these negatives.”