All 3 GOP candidates back away from pledge 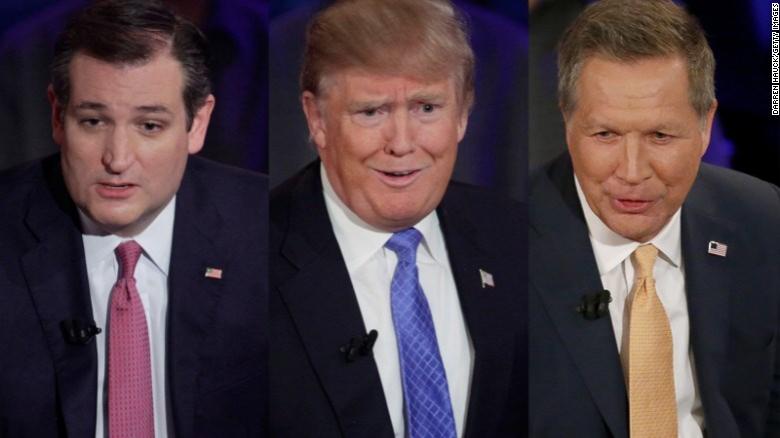 (CNN)Donald Trump, Ted Cruz and John Kasich all stepped back from their earlier pledge to support the eventual Republican nominee during Tuesday night's CNN town hall in Milwaukee.

"All of us shouldn't even have answered that question," Kasich said of the pledge party officials asked all the candidates to sign in September.

"No, I don't anymore," Trump said, when asked by CNN's Anderson Cooper if he continued "to pledge to support whoever the Republican nominee is?"

Trump said he has "been treated very unfairly" by the Republican National Committee and party establishment figures. The billionaire front-runner accused rival Cruz of "essentially saying the same thing" in response to a question about the pledge.

Earlier, Cruz had told Cooper when asked the same question: "I'm not in the habit of supporting someone who attacks my wife and my family ... I think nominating Donald Trump would be an absolute trainwreck, I think it would hand the general election to Hillary Clinton."

Trump said Cruz "doesn't need to support me, I have tremendous support right now from the people."

"I don't really want him to do something he's not comfortable with," he said.

The party loyalty pledge initially came up during the first GOP debate in August 2015.

At the time, Trump was the only candidate in the Fox News hosted debate to decline to rule out an independent presidential bid.

But by September, Trump had agreed to an RNC-sponsored vow.

"The best way for the Republicans to win is if I win the nomination and go directly against whoever they happen to put up. And for that reason, I have signed the pledge," he told reporters at Trump Tower of the written Republican Party loyalty pledge. "So I will be totally pledging my allegiance to the Republican Party and for the conservative principles for which it stands."

The pledge continues: "I further pledge that I will not seek to run as an independent or write-in candidate nor will I seek or accept the nomination for president of any other party."