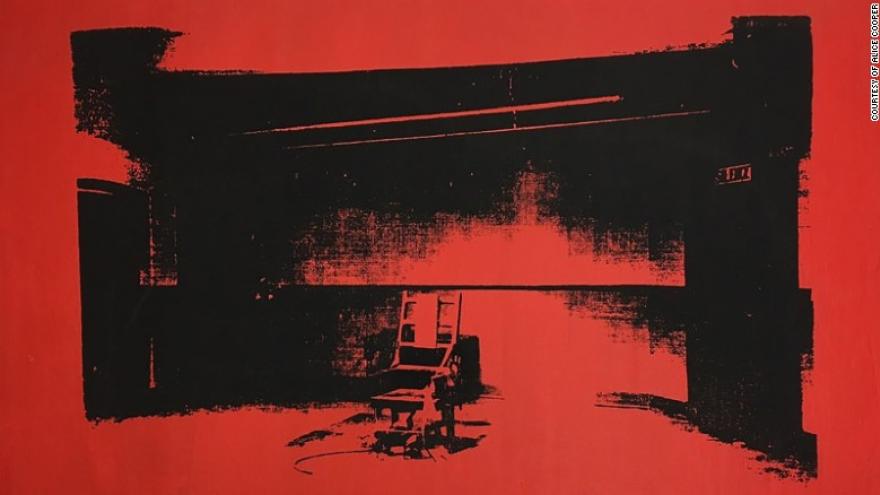 (CNN)Alice Cooper can be forgiven for forgetting some of the finer details of the early 1970s. After all, the rock star was touring the world and riding high off the success of tracks like "School's Out."

But amid the sex, drugs and rock 'n' roll, Cooper forgot something that few others would -- that he owned an Andy Warhol painting. And now he has remembered where he kept it.

"Alice got (it) as a birthday present, way back in the 70s when no one cared really about Andy -- he was just coming into his own," Gordon said over the phone.

"We spoke to Alice's mother who said she thought it was probably still in storage. It took us probably six months to get around to going through, because we have a lot of stuff in storage (from) all the old shows, (but) we found it."

Cooper's friendship with Warhol dates back to the 1970s when the pair would visit New York's legendary Studio 54 nightclub together, according to Gordon. They would often take photos with one another, and the rock star's then girlfriend Cindy Lang even appeared on an early cover of Warhol's magazine, Interview.

At the time, Cooper used a mock electric chair as part of his live show. So, as a birthday present, Lang decided to buy him a Warhol image that looked similar to the prop.

While the artwork may now be worth millions, it was bought for just a fraction of that.

"I remember Cindy came to the office and said that she wanted to give Alice the electric chair (painting) for his birthday, and (Warhol's studio) said she could have one for $2,500," Gordon said.

"That's my recollection but everything from those days is really foggy. As I (later) found out -- things that I thought were real were not real."

And when it comes to Warhol's art, separating real from fake can be a challenge.

As well as examining the painting, the art specialist scrutinized Cooper's account before adding the artwork to his catalog.

"When I heard this story, (it) fascinated me (and) it was 100 percent correct -- everything made sense," Polsky said over the phone. "What people don't understand about the electric chairs is that when they were first done -- which was 1964 to 1965 -- they didn't sell.

"Can you imagine putting an electric chair on your living room wall? People just didn't do that back in the day. It's too macabre."

Times have changed, and Warhol's works are now among some of the world's most expensive. Although Polsky did not put a value on Cooper's 22-by-28-inch artwork, he says that other electric chair images from Warhol's series "Death and Disaster" have sold for over $10 million.

"That gives you the upper end (of the price range), at least," he said. "My guess is that this would do pretty well, given the celebrity provenance and the quality of the image.

"But right now, my understanding is that they're gonna hang it in Alice's home and enjoy it for a while."