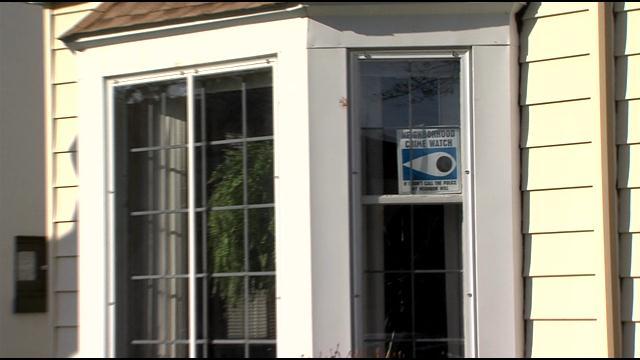 A Bay View burglary is busted just hours after two suspects think they've gotten away with a stolen TV.

It happened at 6:30 p.m. Wednesday in a quiet block of South Fulton Street.

\"That was the hardest thing for me to believe, just so bold,\" said Steve Harrington, victim. \"Every drawer was open. They had even taken the couch cushions off.\"

He said two men broke out a back window to get inside a home he owns with his wife.

\"This isn't a full-time residence,\" he added. \"There's really nothing of value here.\"

But there is a flat-screen TV. Harrington said the criminals took the sheet off a bed to cover it up and walked right out the front door.

\"One of my neighbors was actually in her front yard and as the gentleman was walking out the front with the TV, they actually made eye contact,\" he recalled.

It was that scary encounter that was likely the key for police. They say a witness gave a detailed description of the suspect and the car. Harrington said up to three neighbors called police.

District Six officers used the information to track down the suspects at a nearby gas station on Kinnickinnic Avenue. Along with the TV, police found a crowbar and flashlight.

\"The TV was gone for two hours. So that's fantastic,\" he said. \"They had all the property back to us in the time it took them to process the scene.\"

Evidence of that still remains, but Harrington appreciates the joint effort to catch the bad guys. His wife posted a picture of the officers who helped with the case to the Bay View Neighborhood Watch Facebook page.

\"It's sad to say, but we live in an urban area and these things happen,\" added Harrington. \"The more we can watch out for one another, we get good end results like this.\"

Police say the 40-year-old and 44-year-old suspects are both convicted felons. Charges are expected to filed against them in the coming days.