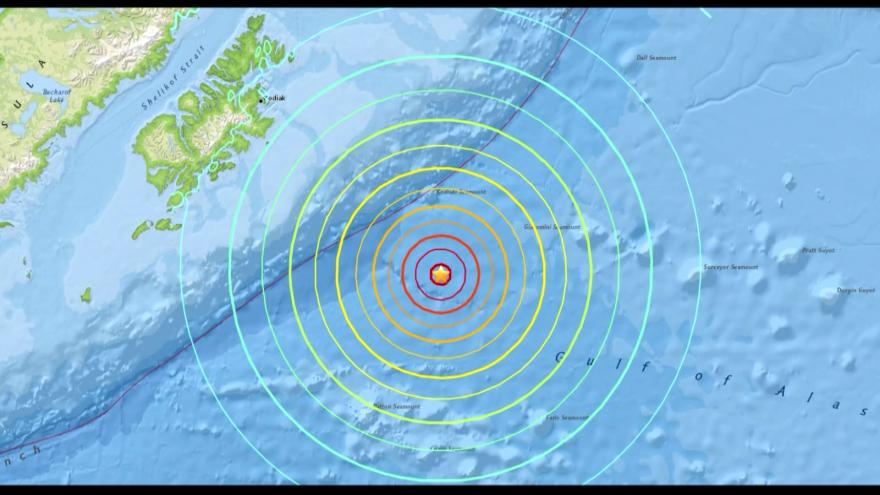 ANCHORAGE, AK (CBS NEWS) -- A magnitude 7.9 earthquake struck off Alaska's Kodiak Island early Tuesday, prompting a tsunami warning for a large swath of coastal Alaska and Canada's British Columbia, while the remainder of the U.S. West Coast was under a watch. A tsunami watch issued for Hawaii was later canceled.

The powerful quake hit at 12:32 a.m. about 175 miles southeast of Kodiak Island.

Warnings from the National Weather Service sent to cellphones in Alaska warned: "Emergency Alert. Tsunami danger on the coast. Go to high ground or move inland."

Kodiak officials warned residents to evacuate if they lived in low-lying areas.

About two hours after the quake, the city of Kodiak, which was projected to see the first wave at about 1:45 a.m., still had no reports of a wave hitting.

Lt. Tim Putney of the Kodiak Police Department said: "We haven't seen anything yet or had any reports of a wave."

However, officials were telling people to hold fast at evacuation centers until further notice. He said the town has several shelters above the 100-foot mark, and they were still encouraging people below that level to evacuate.

The earthquake woke Putney up out of a dead sleep, and he estimates it shook for at least 30 seconds.

"I've been Kodiak for 19 years that was the strongest, longest lasting one I've ever felt," he said by telephone.

But he said the police department has received no reports of damage.

Kodiak emergency officials said they'd received two reports that tide levels in the city's channel were fluctuating from six inches to a foot. Such fluctuations can sometimes be a warning of a coming tsunami.

San Francisco officials tweeted an urgent message: "If you are w/in SF & 3 blocks of the Pacific Coast or w/in 5 blocks of SF Bay, PREPARE TO EVACUATE SO YOU ARE READY IF EVACUATION IS NEEDED. Check on neighbors who may need help."

The U.S. Geological Survey tweeted an explanation of what caused the quake:

The M 7.9 occurred as the result of strike slip faulting. At it's location, the Pacific plate is converging with the North America plate.

Over the preceding century, 11 other M7+ earthquakes have occurred within 600 km of today's earthquake.https://t.co/JzzWd0ID2k