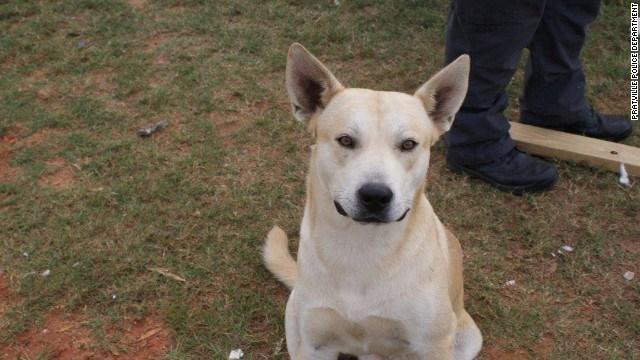 A pooch in Alabama got its owner busted for alleged drug offenses -- all with a gleeful wag of its tail.

The dog, Bo, was caught up in the incident when police executed a drug search warrant this week at the Prattville home of suspect Edward Melvin Henderson.

Henderson took off and dashed toward a wooded area at the back of his home, the Prattville Police Department said in a statement.

Bo, a mix of a pit bull and husky, ran after Henderson after investigators told the dog to \"go get him.\"

Authorities briefly lost sight of them and were close to giving up. But an excited Bo had found his owner hiding in tall grass, and was wagging his tail. Authorities saw the tail and arrested Henderson.

\"Henderson was taken into custody without further incident, thanks to his dog Bo,\" the statement said. \"The search warrant resulted in the recovery of methamphetamine and components from a meth lab.\"

Henderson was charged with failure to obey police, two counts of unlawful manufacture of a controlled substance and possession of drug paraphernalia.

As for Bo, he is doing fine after the Tuesday incident.

Relatives are taking care of him and the local animal control has been checking up on him.