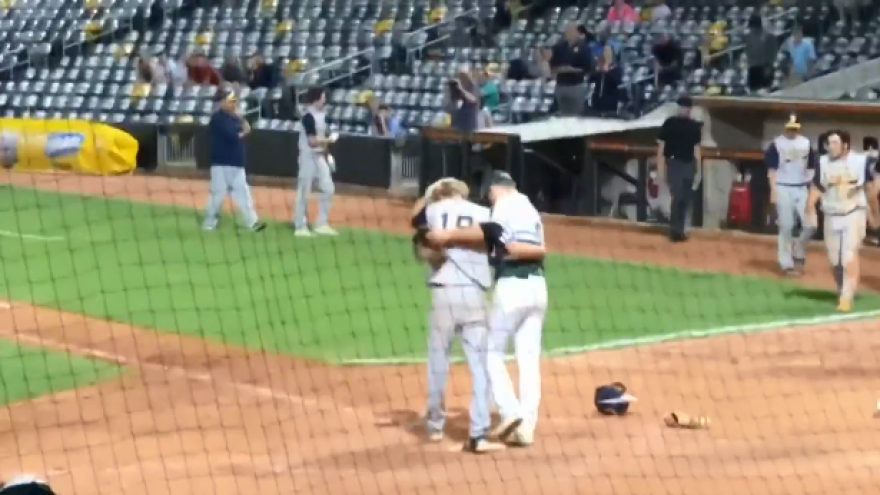 (CBS NEWS) Sportsmanship stole the show during a Minnesota high school baseball game last week. Pitcher Ty Koehn struck out his childhood friend, Jack Kocon, who was playing for the opposing team. The pitch won the game for Koehn's Mounds View High School team and his fellow players ran onto the field to celebrate the win.

But instead of joining the party, Koehn walked in the opposite direction, towards Kocon, and gave him a big hug.

"It just felt like the right thing to do," he told CBS Minnesota station WCCO reports. The boys had played Little League together and Koehn knew their friendship was more important than any game, he said.

Instead of immediately celebrating a trip to the state championship, pitcher Ty Koehn consoles his childhood friend that he just struck out.

Sportsmanship at its finest. (via @b757fo_jim)pic.twitter.com/xPQORx8f5H

What did the pitcher say to his friend? In the interview with WCCO, Koehn recounted sharing words of encouragement: "You had a great season, you're a great player and don't let this situation, don't let this outcome affect our friendship. And I told him I loved him and he's my brother and our friendship will always last longer than this silly game and its silly outcome."

Coach Mark Downey praised Koehn's instincts. "He's a tremendous competitor, but as you saw on the video, he understands there is a bigger picture and friendship really matters," Downey told WCCO.

As for Kocon, it's a moment he'll never forget. He told the station, "I was just thinking in 20 years I'm not gonna remember the score of that game. But I'm gonna remember him coming up to me after that and just kind of being there for me when I needed someone."