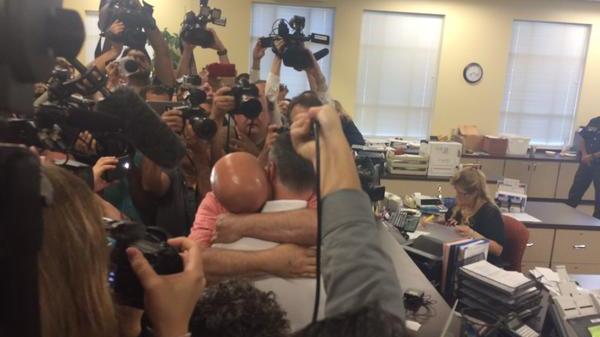 (CNN)With the clerk who had refused them in jail, William Smith Jr. and James Yates on Friday morning became the first same-sex couple to receive a marriage license in Rowan County, Kentucky.

Pressing through a throng of reporters, Smith and Yates picked up the marriage license they'd been seeking since the U.S. Supreme Court legalized same-sex marriage in June.

They emerged holding hands shortly after the courthouse opened at 8 a.m., as opponents booed and supporters cheered and chanted, \"Love wins!\"

\"We're just really ... happy right now to finally get married and have it recognized here,\" said Yates, who proposed to Smith this summer after a nine-year relationship.