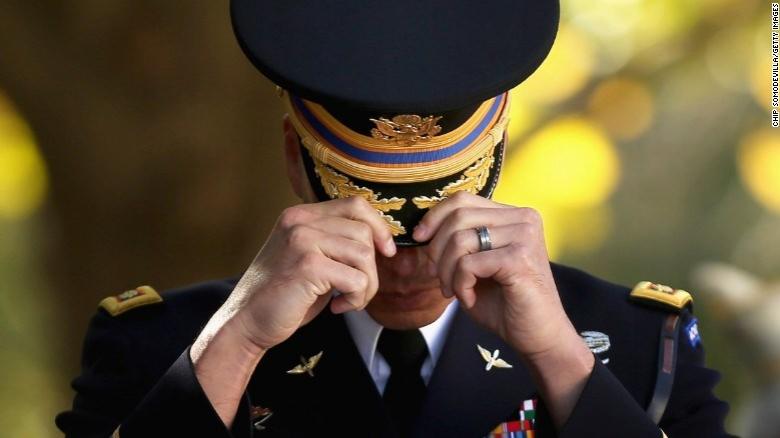 (CNN) -- One military wife recalls staying up all night and deleting every Facebook picture of her children, every post that mentioned them or where they went to school. She Googled herself, trying to figure out how easy it would be to find where the family lived. In the morning, she went to her car and scraped the military decal off the front window.

As the spouse of a Special Forces soldier, she's always tried to be conscious of how much she advertises that she and her three young children are a military family.

\"It's hard because I am so proud of what my husband does, but lately so many spouses that I know are actually scared that they could be targets of ISIS or someone who sympathizes with ISIS,\" she said, asking that CNN keep her name out of the story for that reason.

This week brought the latest in a string of attacks that members of military families say has spooked them into quietly changing the way they operate online and in real life.

In all caps, this message: \"AMERICAN SOLDIERS, WE ARE COMING. WATCH YOUR BACK. ISIS.\"

The tweet included a link to a statement that said, in part, \"We won't stop! We know everything about you, your wives and children. U.S. soldiers! We're watching you!\"

The hacker managed to post other threatening messages, propaganda videos and some military documents until the accounts were disabled. Central Command quickly assured that it was relatively easy to hack Twitter, no serious security details were revealed and it would find who was behind the hack.

She and other family members told CNN this week that they first began to think about the possibility in May 2013 when a uniformed British soldier in London was murdered by two men who shouted \"Allahu akbar,\" or \"God is great.\"

Others started to fear the possibility of their service members or themselves being targeted after the killing of a Canadian soldier during an October attack on the country's parliament. Attacks and plots in Australia have them concerned, too, they said.

In September, the Australian prime minister said a plot to kidnap a member of the public, behead the victim and then drape him or her in an ISIS flag had been thwarted. In December, a self-styled Muslim cleric held hostages in a Sydney cafe for 17 hours, a drama that ended with the deaths of two hostages. The gunman, who was known for sending hate mail to military families, was killed.

The slayings in Paris, for which al Qaeda in the Arabian Peninsula has taken credit, have prompted Broadway-Mack to think about security at North Carolina's Fort Bragg.

\"Before the incident in Canada, I honestly didn't think ISIS was a threat to our family or other military families,\" she said. \"I worry about the hundreds, thousands of folks going to and from work in uniform. They, too, could be targets. I think of other areas around the country where there's a large military presence -- an attack, ambush, lone terrorist is something I fear.

In late November, the FBI issued a warning to U.S. military members that ISIS was calling for attacks against them, a law enforcement source told CNN. The source said that \"overseas based individuals are looking for like-minded individuals in the U.S. to carry out these attacks.\"

The warning asked members of the military to \"review their online social media presence for any information that might attract the attention of violent extremists.\"

The bulletin also said authorities were concerned that ISIS members were \"spotting and assessing\" individuals in the United States who may be interested in carrying out attacks inside the country against members of the military, a U.S. counter-terror official told CNN.

Lori Volkman, who is married to a commanding officer, said she knows military members and spouses who have stopped openly carrying their uniforms to their car after a visit to the dry cleaners.

Some have stopped wearing clothing with military insignia and are more careful when they open their wallet to avoid showing military IDs or payment cards.

But it was difficult when her young daughter was watching television this week and saw the news about the Centcom hack and the threat that ISIS was coming for soldiers.

\"She turned and looked at me and you could see it registering -- we're soldiers. She had a very worried look,\" Volkman said. \"But kids are comforted by whatever their parents tell them. We can't live our lives in fear and we try to reassure them.\"

A blogger and communications firm CEO, Volkman wonders how she would even begin to scrub her online presence. Angela McCormick Ricketts says she's thrown her hands up. Her memoir, \"No Man's War\" is a critical success. She's done a lot of press and is omnipresent online.

\"I'm probably screwed if ISIS starts targeting yappy military spouses so it's too late now! There's also a part of me that thinks that's what they want -- to make us always looking over our shoulders. So no. No to all of it,\" she said.

It's a matter of principle, she and others said.

Why should families bend to fear and stop sharing online when social media has helped many of them get through 14 years of non-stop war?

Though the military has at times struggled with how much freedom its members should have on social media, relatives have wholeheartedly embraced it.

Military families appear to use social media at higher rates than civilians, according to data from the Pew Research Center. Social media as we now know it wasn't even around when the Afghanistan war began. Facebook launched in 2004, almost exactly a year after the United States invaded Iraq. Now, dozens of military spouses have blogs and Facebook caters to the community.

A 2014 survey by military advocacy group Blue Star Families found that 75% of 6,200 respondents considered the use of social media to be very important.

Beyond using it to get practical information like, say, what's happening on a base, social platforms opened up a military culture that has historically discouraged displays of emotion. Social media has offered a safe space to reveal trauma and heartache. It's brought more comfort and less isolation.

A spouse in Montana who was gripped by depression during a third deployment can find a spouse in New York who was going through the same thing, and they can help each other in a way that no traditional therapy could.

Marine Corps. spouse Liz Snell relies on her new non-profit's website Military Spouses of Strength to be a conduit to family members who have suffered from depression and the general wrung-out feeling of enduring years of war. Her husband has been deployed to Iraq and Afghanistan five times.

\"I see being online as a way to stay honest, to stay healthy, to help,\" she said. \"I don't want that to be hurt because of some threats that are just some dumb hacker. I don't want to let them win that way.\"

Amy Bushatz agrees. The Army wife writes the SpouseBuzz column for military.com, which has 10 million members.

\"Being a military family is a vulnerable experience, period. If you live in a military town, this is the norm,\" she said. \"Is there more cautiousness now? Sure, but that's not a bad thing. (There won't) be a victory for anyone who thinks they can frighten us.\"

CNN's Pamela Brown and Jim Sciutto contributed to this report.