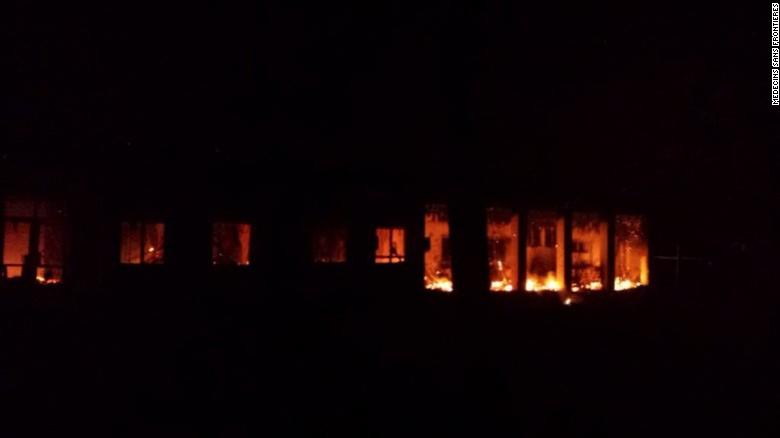 (CNN)Last month's U.S. airstrike on a Doctors Without Borders medical compound in Afghanistan appeared precisely focused on the main hospital building, the charity said in its internal review of the strike released Thursday, noting that the building's GPS coordinates had been provided earlier to the military.

Doctors Without Borders staff also reported seeing people shot from the air as they ran between buildings during the hourlong attack October 3 in Kunduz, it said. The charity said at least 30 people -- including 13 staff -- died during the early-morning strike.

Gen. John Campbell, commander of U.S. forces in Afghanistan, has said the hospital was hit accidentally during an American airstrike. The Pentagon is carrying out an investigation, as are NATO and Afghan authorities.

The U.S. Department of Defense said Thursday it appreciated Doctors Without Borders, also known as Médecins Sans Frontières, or MSF, making its report available to American investigators and expressed its condolences to those affected.

"We continue to work closely with MSF in identifying the victims, both those killed and wounded, so that we can conclude our investigations and proceed with follow-on actions to include condolence payments. We are also committed to working with MSF to determine the full extent of the damage to the hospital, so that it can be repaired in full," Capt. Jeff Davis said in a statement.

The Pentagon has said the United States will make "condolence payments" to wounded noncombatants and families of noncombatants killed.

As the fighting intensified, Doctors Without Borders said it reaffirmed the GPS coordinates of the main hospital and administration office building at its Kunduz center with the U.S. Defense Department, Afghan Interior and Defense ministries and the U.S. Army in Kabul in a September 29 email.

"Confirmation of receipt was received from both U.S. Department of Defense and U.S. Army representatives, both of whom assured us that the coordinates had been passed on to the appropriate parties.

"Oral confirmation was received from the Afghan Ministry of Interior. MSF also shared the GPS coordinates with a U.N. intermediary who confirmed transmission directly to Operation Resolute Support," the charity said in its review.

In the week leading up to the strike, Doctors Without Borders said, patients had shifted primarily from being with the Afghan government and police to injured Taliban combatants, and on September 30 around 65 of about 130 patients in the hospital were Taliban.

These included two patients who appeared to be of higher rank. "This was assumed for multiple reasons: being brought in to the hospital by several combatants, and regular inquiries about their medical condition in order to accelerate treatment for rapid discharge," the charity said.

The following day, a U.S. official in Washington asked the organization whether the Kunduz hospital or any other its locations had a large number of Taliban "holed up," the report said. The hospital confirmed the hospital was full of patients who included wounded Taliban.

"MSF also expressed that we were very clear with both sides to the conflict about the need to respect medical structures as a condition to our ability to continue working. A U.N. civilian/military liaison advised MSF to remain within the GPS coordinates provided to all parties to the conflict as 'bombing is ongoing in Kunduz,' " the report said.

Doctors With Borders staff confirmed it was quiet and calm at the Kunduz hospital the night of the airstrike.

"No fighting was taking place around the hospital, no planes were heard overhead, no gunshots were reported, nor explosions in the vicinity of the hospital," the review said.

The charity said the gates were shut and a coordinator conducting a nightly security round reported that the center "was calm, with no armed combatants present, nor any fighting on the hospital grounds or within the audible vicinity. All MSF guards were on duty and MSF was in complete control of the compound."

Doctors Without Borders said Taliban and Afghan government forces had complied with a no weapons policy at the center and "medical staff were making the most of the quiet night to catch up on the backlog of pending surgeries."

Authorities alerted to the strikes

The calm was shattered when U.S. airstrikes began between 2 and 2:08 a.m. local time when the hospital was "busy and fully functional," the report said.

It said 105 patients -- including about 20 wounded Taliban -- 149 staff and one delegate from the International Committee of the Red Cross were present when strikes began.

The strikes lasted about an hour, it said, during which Doctors Without Borders called a representative from NATO's Resolute Support Mission in Kabul to report the hospital had been struck and also contacted the Red Cross, the U.N. Office for the Coordination of Humanitarian Affairs' civil-military liaison in Afghanistan and the U.S. Defense Department in Washington.

"A series of multiple, precise and sustained airstrikes targeted the main hospital building, leaving the rest of the buildings in the MSF compound comparatively untouched," the charity's report said.

"This specific building of the hospital correlates exactly with the GPS coordinates provided to the parties to the conflict," it said, adding that GPS coordinates were taken directly in front of the main hospital building hit in the strikes.

Some bodies 'burnt beyond recognition'

The center's Intensive Care Unit was the first building to be hit before the airstrikes moved east to west across the main hospital building in "wave after wave of strikes," the charity said.

"Many staff describe seeing people being shot, most likely from the plane, as people tried to flee the main hospital building that was being hit with each airstrike.

"Some accounts mention shooting that appears to follow the movement of people on the run. MSF doctors and other medical staff were shot while running to reach safety in a different part of the compound," the review said.

The total number of dead was at least 30, it said, including "10 known patients, 13 known staff, and 7 more bodies that were burnt beyond recognition and are still under the process of being identified." One staff member and two patients were missing, and other remains could still be found in the rubble, it said.

The Doctors Without Borders review concluded that there was "an urgent need for a widely agreed upon and unambiguous recognition of the practical rules under which hospitals operate in conflict zones."

The report describes the view from inside the hospital of a "relentless and brutal aerial attack by U.S. forces," said Dr. Joanne Liu, international president of Doctors Without Borders or MSF, in a statement announcing the review's release.

"What we know is that we were running a hospital treating patients, including wounded combatants from both sides -- this was not a 'Taliban base.'

"The question remains as to whether our hospital lost its protected status in the eyes of the military forces engaged in this attack -- and if so, why. The answer does not lie within the MSF hospital. Those responsible for requesting, ordering and approving the airstrikes hold these answers," she said.

Liu said that the Afghan and U.S. governments had yet to consent to Doctors Without Borders' request for an independent investigation by the International Humanitarian Fact-Finding Commission, which she said was a "critical step" in demonstrating commitment to the Geneva Conventions.

Announcing in October that the hospital had been struck accidentally, Campbell, the commander of U.S. forces in Afghanistan, said airstrikes had been called after Afghan troops advised they were "taking fire from enemy positions."

"If errors were committed, we will acknowledge them. We will hold those responsible accountable, and we will take steps to ensure mistakes are not repeated," Campbell said at a press conference last month.

"We will await the outcome of the (Pentagon) investigation to provide any additional updates, and we will share the results of the investigation once it is complete."

President Barack Obama has apologized to Doctors Without Borders for the attack on the hospital.