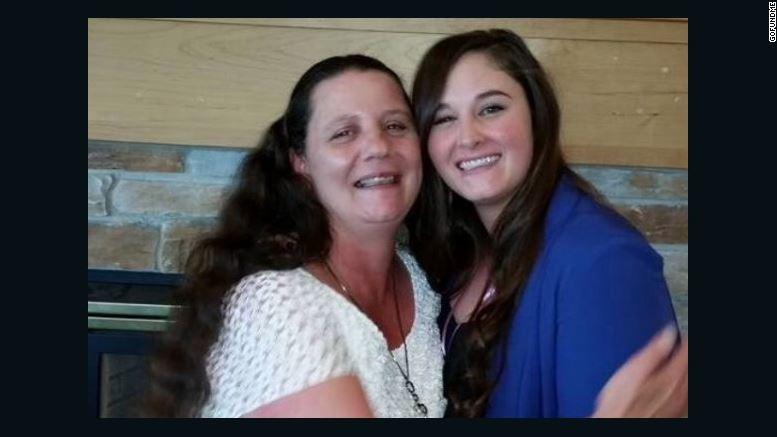 (CNN) As her kidnapper drove toward Washington state, Montana resident Rita Maze called her husband from the trunk of her car, where she was locked by her captor, authorities say.

During the phone call Tuesday night, Maze said her abductor ambushed her at a rest stop that afternoon on her way home to Great Falls, CNN affiliate KXLY reported.

She talked to her husband and a police officer briefly as authorities tracked her phone using signals from cell towers.

Shortly after midnight early Wednesday, about two hours after her call, police found her body in her black Pontiac Grand Prix in Spokane, Washington -- about 350 miles away from her hometown.

Maze, 47, was driving home after a visit to Helena, Montana, on Tuesday afternoon, authorities said.

Her family reported her missing later that night. She called her husband about 10:30 p.m. Tuesday, authorities told KXLY.

"She was at a rest stop and a suspect approached her and hit her in the head and put her in the trunk," Lewis & Clark County Sheriff Leo Dutton told KXLY.

Since Maze did not know her whereabouts, authorities from Montana and Washington state tracked her phone and alerted police departments nationwide.

An Idaho license plate reader notified authorities that the car had crossed into the city of Post Falls, the affiliate reported. Authorities used cell phone records to determine the car was heading toward Spokane.

Police narrowed the search area, but by the time they got to her, it was too late. The Spokane County Sheriff's Deputies said they found the car, along with her body, at 12:30 a.m. Wednesday near the Spokane International Airport.

Authorities did not release a cause of death, but said it is believed to be a homicide, according to the affiliate.

A GoFundMe page created after her death says Maze was on her way back from visiting her mother when she was abducted.

"We as a community will come together in this horrific time for the Maze family," the page says. "We need to do whatever it takes to make things easier for the family to grieve. Proceeds will go to helping to defray service expenses for this genuinely beautiful soul."

Authorities said they have a person of interest, but did not provide additional information.