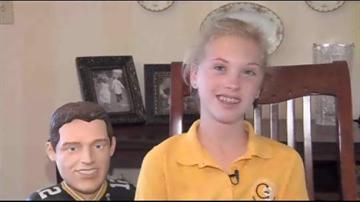 HARTLAND-There's a new girl in Aaron Rodger's life. A 12 year old named Annie Bartosz who has formed the \"Gold in September\" charity aimed at creating greater communication between groups and hospitals in the fight against childhood cancer.

Rodgers is appearing with Annie in a new spot from Gruber Law Officers to bring awareness about her mission.

\"I was freaking out because it's like Aaron Rodgers,\" Annie told CBS 58 News. \"Can't get better than that. I look up to him and the Packers are my favorite team.\"

Annie had no idea the quarterback had agreed to do the TV announcement with her until he showed up for the shoot.

She had closed her eye for some make up and when she opened them it was Rodgers holding the brush.

The two have met before, when Annie's brother Jack was fighting cancer and Aaron would often visit with the family to lift their spirits.

Jack passed away two years ago at the age of 10.

Rodgers told Annie she's continuing his legacy and she should be proud, he knows Jack is proud.

\"I had no idea gold was the color for childhood cancer,\" Annie recalled when she first came up with the idea for her foundation. \"Everybody knows pink in October for breast cancer and \"mowvember\"  in November (for men's health). We have nothing against it. I support both of them but I felt kids come first.\"

One day, Annie hopes to get the NFL to endorse her foundation and she says the support of Aaron Rodger's will play a major role in reaching that goal.