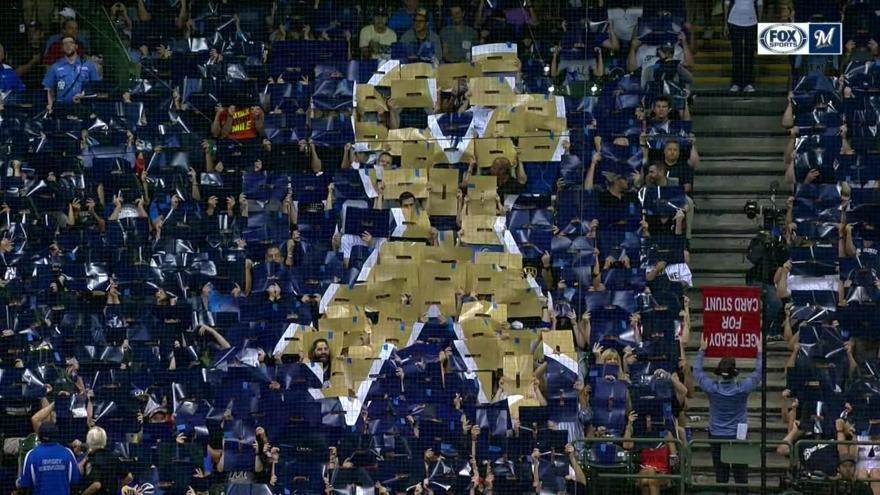 MILWAUKEE (CBS 58) -- A sea of gold filled the stands in Miller Park over the weekend. Fans held up gold signs Saturday to bring awareness to pediatric cancer.

Fans in the stands were given gold and blue posters to hold up. In the center, those signs formed a massive gold ribbon, which brought awareness to childhood cancer.  Several organizations were a part of making this happen, including Gold in September, or G9.

“Everyone was taking part whether they knew what they were doing or not and it all unified into this one big beautiful picture,” Annie Bartosz said.

Annie Bartosz, a 16-year-old high school student, started the G9 organization after her brother lost his battle to pediatric cancer. Her father also later died from cancer too. Annie and her mother, Sarah, finally saw their years-long vision to see the stands at Miller Park become gold Saturday.

“We will not let cancer define our family, rather we're looking for our family to help define what a cure for cancer can look like,” Annie’s mother Sarah said.

Sarah is the President of G9. The organization works to raise money for childhood cancer research and bring awareness to the disease. The organization started after her son, Jack passed away in 2012. Their fundraising efforts took speed in 2014 after the support of Green Bay Packers Quarterback Aaron Rodgers. Now, they’re thankful the Milwaukee Brewers are behind their mission too.

“Seeing all these people holding up gold cards because of something I did," Annie said. "What can come next,"

The Bartosz’s are filled with hope after seeing the wave of gold, but they know they have more work to do.

“It was bittersweet to see the stadium turn gold. Bitter because John and Jack weren't there to witness it with us, but so very sweet to know we accomplished the goal,” Sarah said. “We have overcome tragedy and we're going to help other families be successful in this fight.”

For more information about Gold in September, please click here.