A survivor's story: Man lives on despite paralyzing gunshot wound 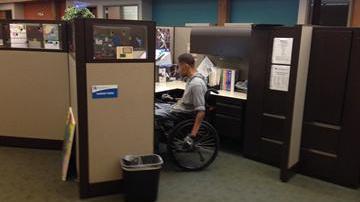 MILWAUKEE -- Milwaukee had 106 homicides in 2013.  Hundreds more were shot, but most move on with their life thanks in part to top notch medical care.

However, a gunshot wound has lasting effects on a person. ?   ?

“I honestly think that dying would have been easier.\"?? It took six years for Harvey Ross to roll with it.

“To wake up in the ICU and the doctor come in and your mother asks 'is he going to be alright?' The doctor says yes but his following statement is that 'well he'll never walk again'. I don't know how that goes together.\"??

\"He had a revolver so I heard him cock the hammer back.\"??

After a physical dispute with his girlfriend, her father got a gun.  ??

\"He shot me. The only thing I saw was the fire from the gun and then my body just went limp.”?

He carries the moment with him every day - literally. ?

\"The bullet went in through my left side, through my shoulder and it's actually lodged in my C2 vertebrae.\"??

\"You always hear about people getting shot and end up either dying or surviving.\"??Ross survived, despite years of wishing he hadn't.  He wanted life support taken off.  He wanted to commit suicide. ??

It's a reality only family and friends deal with.  Unless you work at a hospital. ??

\"The outcomes are equally as vast from death to a minor injury,” Dr. Stephen Hargarten from Froedtert Hospital said.  ??

That's where Froedtert's trauma center comes in.  Gunshot victims are rushed there for help. ?

Similar to what Ross lives with.  ??First responders, paramedics, and ER doctors work to save a patient's life - no matter what. ??

They'll live. Just not the same as they're used to. ?

\"They may have a significant lifetime disability, but they have a good chance,\" Hargarten said.

Many times injuries in a shooting are deemed non-life threatening or non-fatal. ? Don't tell that to Ross - there are times he felt his life was taken. ??

His outlook slowly evolved.  Now he wishes he could get through to those who deal with violence every day.  He knows there are better ways to solve problems. ??

\"What you're about to do is going to affect your brothers, your sisters, your mother. It's going to affect some innocent bystanders that have nothing to do with it. Whoever you shoot or kill, they have family members that love them, regardless of what kind of person they are.\"??

He knows because his family deals with it.  He often wonders where he'd be now if a bullet hadn't nearly killed him. ??

\"I honestly can say I don't know what my life would have been like. If this never would have happened to me, who knows? But I live a pretty, quote unquote normal life. It's fulfilling.\"??

Ross plays for the Milwaukee based wheelchair rugby team.  He also works at independence first full-time.  It's a south side non-profit that helps people with disabilities. ??