A Republican primary race in Mississippi gets ugly 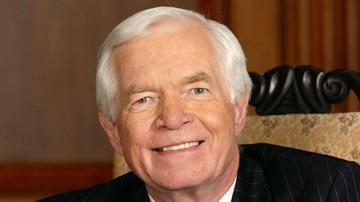 (CNN) -- Police charged three more men in connection to the blogger who's been accused of taking a picture of Sen. Thad Cochran's wife in her nursing home bed and creating a political video against the longtime senator from Mississippi.

Authorities on Thursday arrested Mark Mayfield, an attorney and local tea party leader, and Richard Sager, an elementary school P.E. teacher and high school coach, according to The Clarion-Ledger newspaper. Police also charged a third individual, John Beachman Mary, but did not take him into custody because of \"extensive medical conditions.\"

The scandal has escalated tensions in already ugly Republican primary fight in which Cochran faces a fierce challenge from the right by state Sen. Chris McDaniel. Both will compete in the June 3 primary.

The latest developments come a week after political blogger Clayton Kelly was arrested for obtaining an image of Cochran's wife, who suffers from dementia and has lived in a nursing home for 14 years.

The photo surfaced in a political attack ad on YouTube that aimed to smear Cochran, the Clarion-Ledger reported. It is unclear how the photo was used because the ad was removed within hours of being posted, according to the newspaper. Authorities added felony charges of conspiracy and photo voyeurism to the count of exploitation of a vulnerable adult that Kelly was charged with, the newspaper reported. He faces a total of 20 years in prison.

McDaniel's camp has fiercely denied any involvement in the plot, and so far there has been no tangible evidence that links the campaign directly to Kelly.

\"As we have said since day one, the violation of the privacy of Mrs. Cochran is out of bounds for politics and is reprehensible,\" McDaniel said in a statement about the arrests on Thursday. \"Any individuals who were involved in this crime should be prosecuted to the fullest extent of the law.\"

Russell was referring to John Beachman Mary, who started co-hosting a WMXI radio program after McDaniel left the program when he was elected to the state Senate. But McDaniel continued to take part in the show as a guest host and regularly co-hosted with Mary, according to the Clarion-Ledger.

In an open letter Wednesday, McDaniel blasted Cochran and accused his campaign of resorting \"to shameful slander\" for raising questions without a \"shred of evidence to back up those accusations.\"