A march for justice turns into a sit in 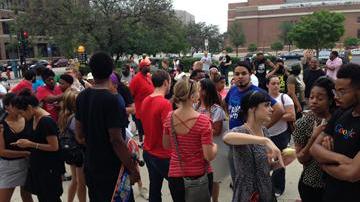 Protesters say their repeated calls for justice have not been heard.

Many marched at Red Arrow Park on Friday and then moved their efforts to the Police Administration Building, where they had a sit in. Many asking for justice in the Dontre Hamilton case. Police in riot gear guarded the doors.

Protesters cries were passionate, voices were loud, but according to them the message is falling on deaf ears. They believe the system is designed to conquer and divide. But protesters say they are in this fight for the long hall.