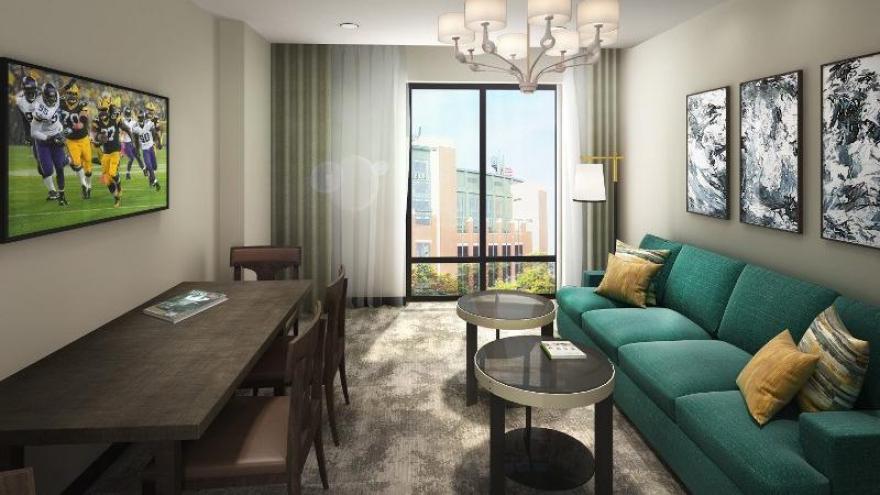 If you're making a trip up to Green Bay this fall, get ready for some big changes.

Construction is ramping up on the Titletown District, a 34-acre development next to Lambeau Field. When complete, the area will feature parks, an ice skating rink, new restaurants, and much more.

The crown jewel of the development is a new luxury hotel called Lodge Kohler. Thursday, developers took us inside for a sneak peak at the property.

\"It's just a delight that we've made it this far,\" says Christine Loose. \"A year of construction, and you can actually see what we've been building.\"

The 4-diamond hotel and spa is the first of its kind in Green Bay, filling a void for tourists looking for that extra level of comfort. A mid-week room will run you $170+. Game Day rates require a two night minimum, and start at $438 per night.

\"We've got a terrific hotel community, but this was a piece that was missing,\" says Brad Toll of the Greater Green Bay Convention and Visitors Bureau. \"We can't wait to get the lights on and the doors open.\"

The hotel will include 134 guest rooms and 10 suits. It also features a 5th floor restaurant called \"Taverne in the Sky\", where guests can catch stunning views of Lambeau Field. Rooms on both sides of the hotel also feature rarely-seen floor to ceiling windows, and special bathrooms designed by Kohler. Packer fans can also purchase themed packages, including an \"Explore Lambeau Package\", and a \"Water Immersion Package.\"

Tourism officials are hoping the hotel, and Titletown District in general, will attract visitors from Milwaukee.

\"The Titletown District is going to bring a center of activity and fun,\" says Toll. \"It will provide more things for folks from Milwaukee to do. It really puts greater Green Bay on the map.\"

Kohler is already accepting reservations at the hotel, which is set to open July 24th.

Phase one of the Titletown District is set for completion this fall.