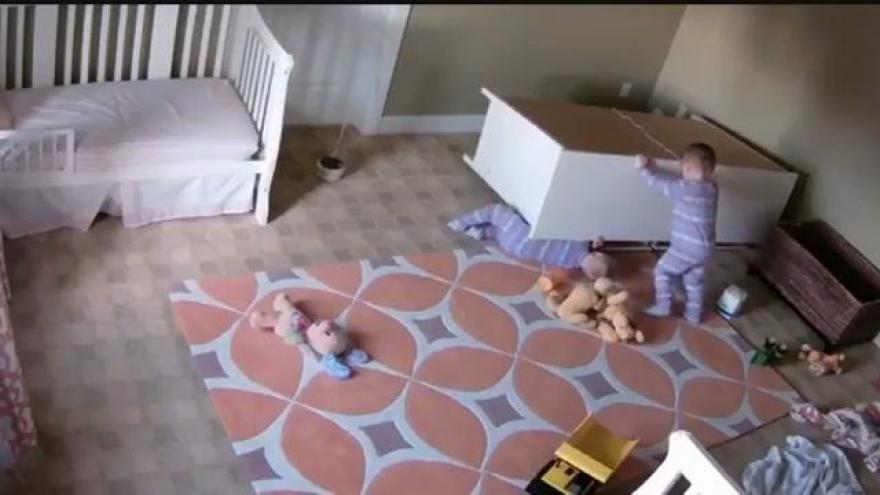 A shocking video shows two-year-old twin boys in Utah climbing into the open drawers of a dress. When the dresser tips over, it traps one of the boys underneath. His brother tries to lift the giant piece of furniture, then he tries another approach. Incredibly, he moves one-hundred pound dresser just enough so the other child can escape.

"My heart sank, I didn't know what to do I felt like the worst mom in the world," said Kayli Schoff.

Both kids are okay. Schoff says her twins Bowdy and Brock didn't even get a bump or bruise.

The twins' dresser is now secured to the wall.

"...it's just not the first thing that you think about to do with a dresser or safety as far as children," said Schoff.

Schoff also took off the knobs so her kids can't climb the dresser.

The Schoff's aren't the only family to go through an experience like this.

It happened in Milwaukee in 2015. A 4-year-old died after a TV fell on her. She was climbing to load a DVD when it happened.

IKEA recalled at least 29 Million dressers and chests in June of 2016, which were at risk of tipping over, following the death of at least 3 children since 2014. Last month, IKEA settled three wrongful death claims out of court for 50 Million dollars.

Schoff says the dresser in the boys' bedroom is the eight drawer Hemnes, which was not recalled by IKEA, but the website and instruction manual states the product must be secured to the wall using the provided anchors.

"This is kind of what we see. This is how it occurs. They pull those drawers out and the child crawls up into it, and that's what kind of helps make that tip-over happen," said Lisa Klindt Simpson with Safe Kids Southeast Wisconsin & Children's Hospital.

Anchorit.gov says every 30 minutes tipped furniture or a falling TV sends a child to the emergency room, and a child dies from those injuries every two weeks.

Anti-tip devices are sold online and in-stores for prices ranging from $5 to $25. Consumers can visit their local home improvement, electronic or mass merchandise store to purchase an anti-tip device. If you would like to buy one online, search for "anti-tip strap" or "anti-tip kit."

The installation is easy and only takes a few minutes. You will usually only need a screwdriver and possibly a stud finder.