A farmers market in Racine stays open through the winter 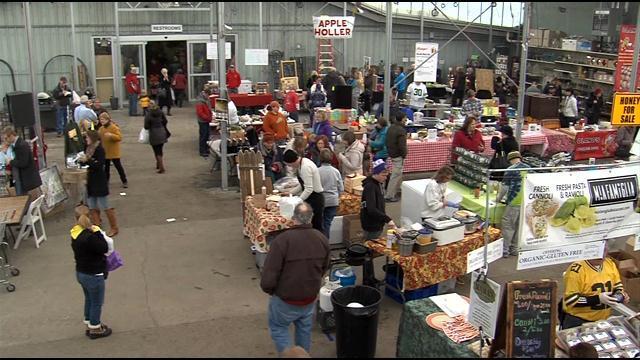 During these cold winter months, fresh, local produce is hard to come by. One Racine business is looking to change that.

\"I think people just have cabin fever and they just want to get out and enjoy again and are sick of being stuck in the house!\" said Milaeger's employee Dan Reisdorf.

Fresh produce, baked goods, eggs and candles; they're all available at the market, which is the first of its kind in Racine.

\"Our goal was to bring fresh foods to the city of Racine. Milaeger's has been doing that for a long time, but to bring farmers together to one location has been a dream,” said market manager Carol Reed.

Reed and Milaeger family member Kara Kading participated in summer farmer's markets but saw a void that needed to be filled during the winter.Together, they worked with local farmers to make it happen.

“There's a huge transition in farming business, where they are using high tunnels and greenhouses to grow food that will be available year round because local food is so important,\" said Reed. She is excited that the store is offering options outside of the grocery store, where items are often shipped in from other states and other countries.

But of course, they're putting on the market with a Milaeger family twist. They wanted to event to fill a need in the community but also be loads of fun.

“It's a party atmosphere. We have bloody mary drinks for people to enjoy, we have a TV monitor so people can watch the game and we've got a fire pit going,\" said Reisdorf.

People have so much fun, Reed says, she thinks they may forget they have other plans. \"One day a fella that was here I saw him at 10AM and I still saw him at 2pm!\" said Reed.

The event has proven to be quite popular. Reed says similar markets in bigger cities like Milwaukee draw in 2,500 customers. This market, which is far newer is bringing in quite an impressive number as well. \"We're not just servicing Racine. I've talked to people from Milwaukee, Burlington, Kenosha, it's drawing people from all over. People really need this,\" said Reisdorf.

Racine residents Don and Judy Rogalsky say they came for potatoes the first time, but now they keep coming back.“Oh yeah we come and we see who's here. We've ran into a number of people that we known and haven't seen for quite some time,” they said.

And the fun has just begun. Milaeger's says the farmers market will continue year round.