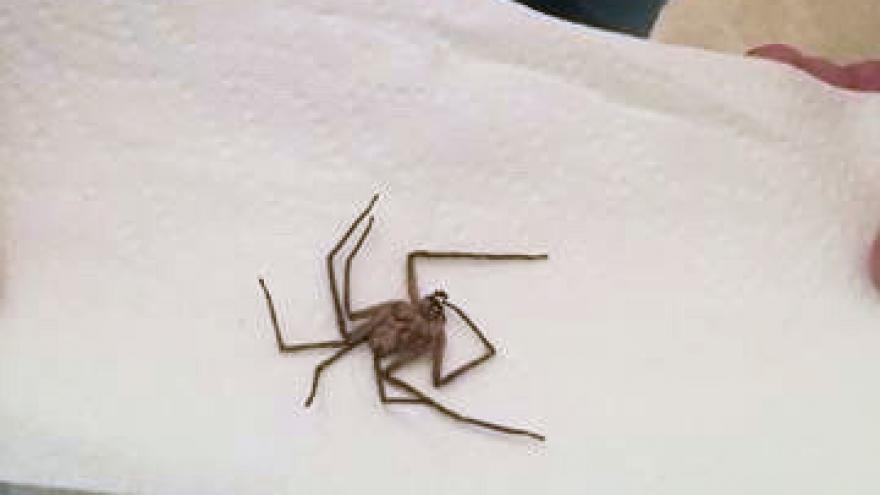 SHELBY TWP. (WWJ) – Not native to Michigan, one of the largest spiders in the world caused a fright when it crept its way into a Shelby Township apartment.

Mother of two Jillian Duke says, although she’s been taking some heat online, she has no regrets about squashing the enormous arachnid she found lurking in her toddler’s bedroom Wednesday morning.

“Actually I stayed pretty calm. You know, I have a nine-month-old and one that’s going to be two, so I ripped them out of the room,” Duke said. “I was still kind of like, ‘What is going on?’ I took a picture of it, I sent it to my husband, and said, ‘There’s a monster spider in Alex’s room!'”

Not wanting to get too close, Duke said she threw a couple of books on top of the spider and then hit it with a broom. Her father came over and stepped on it, “just to make sure it was dead.”

“…It wasn’t chasing me or anything like that, but it definitely was a shocker,” Duke said. “It’s my child over a spider; I’m not going to take the risk.”

The family saved the deceased spider in a bag and took it to local experts to be identified.

According to entomologists at Cranbrook Institute of Science, it was an Australian Huntsman — an extremely rare sight in Michigan. Named for its speed and the way it catches its prey, the Huntsman is venomous and can bite, but is not known to be aggressive or dangerous to humans.

“They think that it came in like on a shipment of produce; they said something about plants,” Duke said. “How it got into my apartment, I believe it got through the furnace closet from the outside. There are holes that we found.”

In case there are more, Duke said she called pest control which will be by on Friday to investigate.