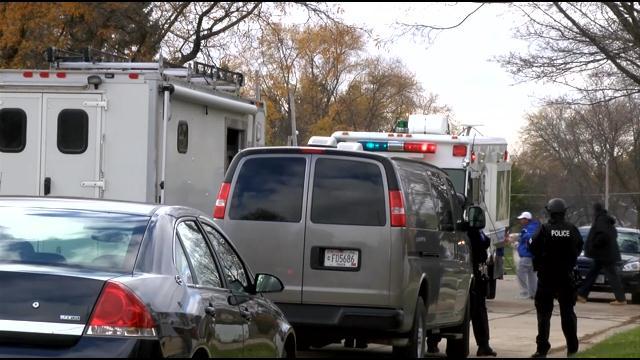 911 calls reveal what led Racine Police officers to kill a dog during a stand-off over the weekend.  According to the phone calls, Kurt Hanson, the man who lost his dog, admitted to a 40-year criminal history.  His neighbors say he threatened to kill their dog, before his own was shot.

It began with a call from a child living across the street from Hanson.

\"There's a man across the street with a really big knife, he's threatening to cut my father right now,\" said the child to a 911 dispatcher.

According to a 911 call, the child's father stopped by Hanson's home after a heated exchange.

\"He came over and threatened to kill my dog,\" explained the child, \"my father went over there to speak to him.\"

The father was shaken after speaking with Hanson, he could be heard shouting on the child's 911 call.

\"Can you send a squad car immediately, please?\" said the father.

In his first call, Hanson made threats toward the officers knocking on his door.

In his second call-- Hanson continued to make threats.

\"I do not talk to police unless I got an automatic rifle on my arm,\" insisted Hanson, as a dispatcher tried to negotiate with him.

\"I got a cross bow, and it will shoot right through their gut, so just tell them to stay the **** away from me,\" said Hanson.

The dispatcher spent half an hour trying to negotiate with Hanson.

\"We're going to have a stand off on the sidewalk, you're going to shoot me,\" Hanson screamed.

Just before hanging up-- Hanson told the dispatcher he had a dog in his home.

Racine police say officers spent three hours trying to peacefully resolve things with Hanson.  According to police department e-mails obtained by CBS-58, Hanson's dog was moving through the scene and causing a distraction-- which led officers to shoot.  The matter is currently under review.