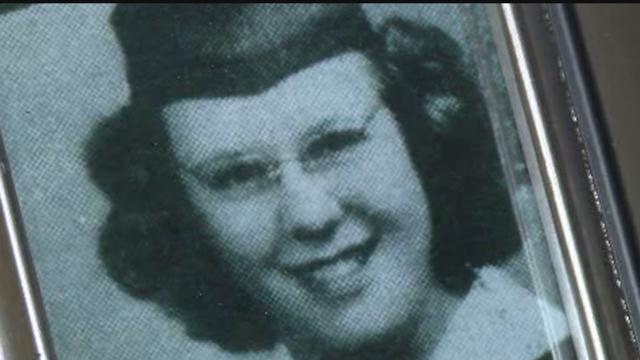 Crack open a 1944 Cudahy High School yearbook, and a smiling photo of Dolores Yokich is not hard to find.

The 90-year-old bleeds purple and gold, a proud Packer to this day.

"For so many people, high school was the best time of their life, and I truly believe it was for her," says her Niece Pam Sztukowski.

But throughout her life, one thing has always been missing; a class ring.

"It was the war years," says Sztukowski. "All the metal was going for ammunition and they weren't making class rings."

Over the years, Dolores, or "Aunt Dolly", expressed sadness over never receiving one.

"In October, when we started playing cards, she saw it, she said something, and a light went off," says Sztukowski. "I'm gonna get her a class ring!"

So she set out to do just that, no easy task 72 years later.

Sztukowski commissioned a jeweler from Minnesota to make the ring, using an exact replica from 1944, complete with school crest and purple stone.

After months of waiting, the ring finally arrived this week, just in time for Aunt Dolly's 90th birthday.

Saturday night, the Cudahy Varsity Poms made their way into Papa Luigi's Pizza, cheering on Aunt Dolly as she received the ring.

"I'm not ever gonna lose it, no way," she says. "I can't believe it. I didn't know my nieces loved me that much." she said with a grin.

A 90th to remember, for the proud graduate.