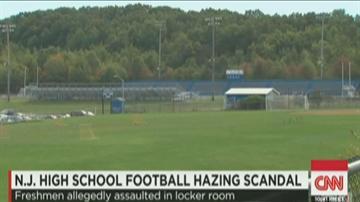 (CNN) -- It may have been endured as an ugly rite of passage for rookie football players to ascend to the ranks of gridiron warriors, but when upperclassmen allegedly sexually hazed freshmen in a New Jersey high school locker room, it crossed a legal line.

Seven of them now face charges as of Friday, and police have taken six into custody. Prosecutors are not naming them because they're juveniles.

And at Sayreville War Memorial High School, proud of its state champion team's years of gridiron triumphs, shame has emptied the bleachers, silenced the cheers and snuffed out the floodlights. The superintendent has halted this year's football season, ostensibly assured of the allegations.

\"There were incidents of harassment, intimidation that took place on a pervasive level, in which the players knew, tolerated and in general accepted,\" Superintendent Richard Labbe said.

It may have gone on for up to a year.

Cloistered in the dressing room, older players allegedly flipped off the lights, and filled the room with jeers as they accosted and sexually harassed their younger targets.

They penetrated at least one of them, prosecutors allege.

Officials have not disclosed details, but a Sports Illustrated article indicated that it likely did not involve intercourse.

One of the three, plus four more players face counts of aggravated assault, conspiracy, aggravated criminal sexual contact, hazing and riot for allegedly participating in the attack of other victims, Middlesex County prosecutors said.

The Sayreville Bombers, who took the state championship three out of the past four years, had launched into a promising season this year.

Now parents used to applauding their sons' conquests on the field are upset they have been benched for the duration.

\"I've never seen so much dedication out of my son, and I want him to play the rest of this season,\" a mother said at a school meeting to the roar of applause. Despondent players vented frustration over not being able to finish what they so confidently started.

They are at odds with parents and players who broke the allegations. That group is less vocal and has declined to be interviewed on camera, afraid to voice grievances out loud.

The despair haunting school hallways has infected the surrounding working class neighborhood, turning into the fear of jail time.