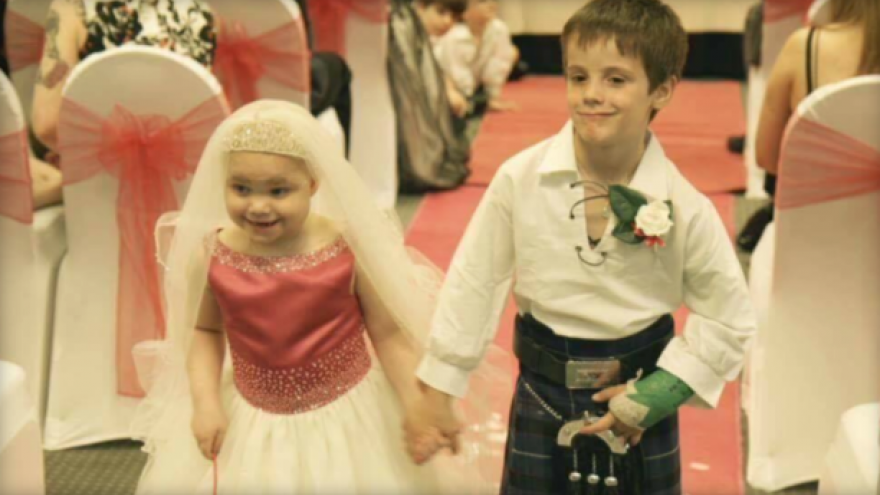 With a sparkly crown, pink tulle skirt and rhinestone-lined silk top, 5-year-old Eileidh Paterson felt like a princess as she walked down the aisle to meet her future "husband."

It was a fairy tale the terminally ill girl dreamed up with her mom after she was diagnosed with stage 4 neuroblastoma -- a cancer that is commonly found in the adrenal glands and, in her case, had spread to other organs.

"When we were told in February that any treatment now would just prolong her life and that ultimately she wouldn't survive, we decided to make a bucket list of things she would love to do and make as many memories as possible," Eileidh's mother, Gail Paterson, told CBS News.

A trip to Disneyland Paris, a room decorated bright pink and a trip to the zoo are among some of the things on Eileidh's list.

But none compared to her No. 1 choice: marrying her best friend, 6-year-old Harrison Grier.

"Harrison has said for over a year that he was going to marry her," Paterson said. "He even 'borrowed' one of his mom's rings to give to her."

On June 18, Eileidh and Harrison finally got their wish.

Surrounded by family, friends and Disney characters, the pair stood in front of an altar as they were read their very own fairy tale, written by Eileidh's mom.

Eileidh was described as a princess who would "stop at nothing to survive," despite her cancer -- the "beast" -- continuously trying to destroy her.

"It took her hair but it couldn't take her smile," Paterson wrote.

Thousands of people stood behind Eiledh in the fight as members of her army, which includes Harrison, Paterson said.

"Harrison wants to marry Eileidh more than anything so that's what they decided to do," the story read. "If Eileidh and Harrison can be happy, smile and enjoy the little things then that's what we should all do. Make the most of every single day as no one knows what will happen the next. Enjoy life, enjoy each other, stand strong and more than anything, believe, hope and love. If anyone deserves a happily every after, then it is most definitely them."

As the story came to a happy ending, Eileidh and Harrison were declared best friends forever. Instead of rings, they exchanged St. Christopher necklaces.

"It reflects the journey through life that they now face together," Paterson explained.

Eileidh was first diagnosed with neuroblastoma at the age of 2.

Since then, the little girl has spent the majority of her young life in and out of hospitals, receiving countless chemotherapies, surgeries, anesthetics, blood tests -- the list goes on and on, her mom explained.

For once, on her daughter's "wedding day," Paterson was happy to see her child be just that -- a child.

She danced, laughed with friends, read stories with princesses and ate cake with her best friend, Harrison.

"Anything we can do to make her life that little bit easier, comfier and most importantly magical, then we owe that to her," Paterson said. "She most certainly deserves it. Eileidh is the bravest little girl in the world and is definitely a superhero."