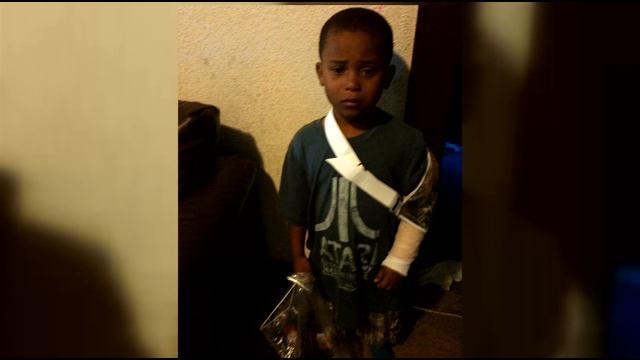 Standing just steps from where his five-year-old nephew was shot the day before, Angelo Toliver couldn't help but think: things could've been worse.

Toliver's nephew, Wesley Terry, was shot around 5 p.m. Tuesday. It happened during Toliver's birthday party outside his home near 39th and Burleigh Street. Six or seven kids, including Terry, were playing outside when someone shot from the nearby alley.

\"My wife and daughters and everybody running around saying 'The kid was shot, my nephew,'\" Toliver said. \"They just saw the blood coming down his arm and knew he was hit somewhere right there.\"

The family didn't wait for an ambulance. They took Wesley to St. Joseph's Hospital about ten blocks away. Doctors treated him for the bullet wound and fractured arm.  The boy is expected to make a full recovery.

Neighbors told CBS-58 News the alleyway where the gunshots came from is the problem area for the entire block. It's made even worse by the large vacant lot where people from anywhere can just pass on through. That's where Terry was playing when he was shot.

\"Nobody ever saw them so they took the coward way out,\" neighbor Crystal Giles said of whoever fired the shots.

\"We all stick together, but then you have somebody that rides by because it's a busy street and they decide they just want to come in and tear down what we're building.\" Giles said.

Giles wants to build a community garden in the empty lot to help keep criminals away. But Toliver says protecting children comes down to basic decency.