5 memorable moments from the Republican debate 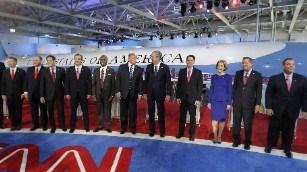 (CNN)The second GOP presidential debate came and went Wednesday night -- but there are some key moments that are sure to live on.

From attacks right out of the gate to policy debates, here are the top five moments from the CNN debate.

1) Fiorina gets back at Trump

In one of the most-anticipated moments going into the debate, Carly Fiorina was given a chance to respond to Donald Trump's comments on her looks, and she delivered.

"I think women all over this country heard very clearly what Mr. Trump said," Fiorina said, when asked about Trump's backtrack that he was talking about her persona.

Trump had been quoted in a Rolling Stone article as saying, derisively, "Look at that face," when Fiorina appeared on TV.

On Wednesday night, Trump tried to save himself after Fiorina spoke.

Throughout his remark, Fiorina, shown on split-screen next to Trump, remained stone-faced.

Jeb Bush came out against Trump when he was asked about a statement the real estate mogul made to CNN earlier this summer about their differences on immigration policy -- and invoked Bush's wife, Columba.

During the debate, Bush said, "To subject my wife into the middle of a raucous political conversation was completely inappropriate, and I hope you apologize for that, Donald."

"I hear your wife is a lovely woman," Trump started to say, but Bush cut back in.

He pointed her out in the audience and reiterated that Trump should say he's sorry.

"Why don't you apologize to her right now?" Bush said.

"I won't do that because I said nothing wrong," he said.

3) Christie shuts down Trump and Fiorina

As Trump and Fiorina battled about their respective business records, New Jersey Gov. Chris Christie got sick of the spat -- and let that show.

Most awkward moments in the GOP debate

"While I'm as entertained as anyone by this personal back and forth about the history of Donald and Carly's career, for the 55-year-old construction worker out in that audience tonight who doesn't have a job ... they could care less about your career," Christie said.

As Fiorina tried to defend the conversation as being about their leadership track records, Christie shut her down.

"We don't want to hear about your careers," he said. "You're both successful people: congratulations! You know who's not successful? The middle class in this country."

"Let's start talking about those issues tonight and stop this childish back and forth between you," he continued.

Bush has had a complicated time on the trail embracing his father and brother, while still trying to run as his own man.

But one of his biggest applause lines of the night came as he fully supported his brother, former President George W. Bush.

"As it relates to my brother, there's one thing I know for sure: He kept us safe," Bush said, cutting off a Trump answer on foreign policy. The crowd loved it.

Bush said his brother sent a clear signal America would be strong as he led the country through Sept. 11.

Fiorina distinguished herself as the only woman on stage when she answered a question about which woman to put on the $10 bill -- going against the grain and saying she wouldn't pick any.

"I wouldn't change the $10 bill or the $20 bill," Fiorina said. "I think honestly it's a gesture. I don't think it helps to change our history. What I would think is we ought to recognize that women are not a special interest group."

The Treasury Department announced this year that it would be redesigning the $10 bill to include a notable woman.

Other candidates suggested a range of options, from Clara Barton to their loved ones.