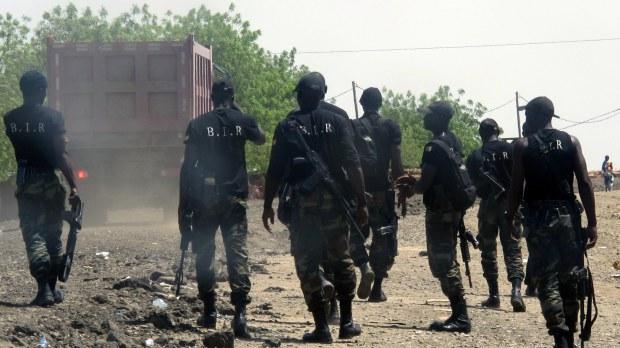 (CNN) -- At least 47 people were killed and 79 were wounded Monday by a suicide bombing outside a school in northern Nigeria, police said.

The attacker was disguised as a student when he set off the explosion in a government boarding school in the town of Potiskum, police spokesman Emanuel Ojukwu said.

\"We suspect Boko Haram is behind the attack,\" Ojukwu said.

The explosion took place at 7:50 a.m. local time outside the principal's office, where students had gathered for a daily speech.

\"We were waiting for our teachers to come and address us at the assembly ground when we heard a huge explosion,\" student Adamu Ibrahim said.

It was not immediately clear how many of the casualties were students.

Although no one? has claimed responsibility for the attack, Boko Haram is the prime suspect.

In February, Boko Haram gunmen killed at least 40 students when they opened fire and threw explosives in student hostels in a government boarding school in the town of Buni Yadi, in Yobe state.

And last year, 42 students were killed when Boko Haram gunmen attacked dormitories with guns and explosives in a government boarding school near Potiskum.

Potiskum, the commercial hub of Yobe state, has been repeatedly targeted by deadly attacks blamed on Boko Haram.

The group's five-year insurgency is aimed at establishing an Islamic state?.