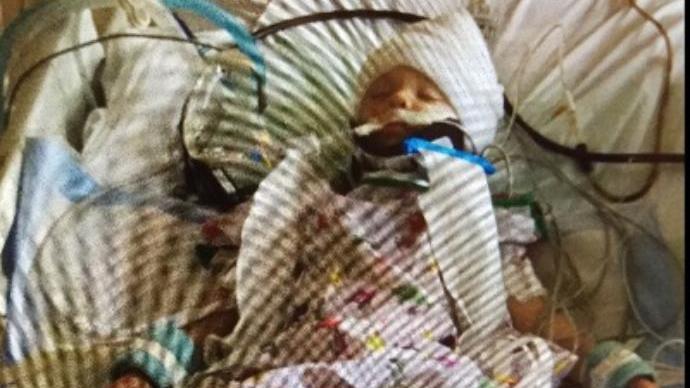 MARSHFIELD, Wis. (WSAW) -- Three weeks after a log truck collided with a woman's SUV, her four-year-old daughter is in rehab, relearning to walk, eat, talk.

In the blink of an eye, the drive home from dropping her kids off on the first day of school left Kelly's Stuttgen's SUV spinning into a ditch. Her daughter was knocked unconscious.

"I was hysterical. Screaming," Stuttgen described of the September 1 incident.

A collision with a log truck smashed her vehicle through its back row. She waited for law enforcement to arrive.

An ambulance transported her and her daughter, Emma, to St. Joseph's hospital in Marshfield, where doctors told her Emma's skull was fractured. Doctors removed a third of her skull in surgery that day.

After three weeks, much of which spent in critical care, Emma is in the rehabilitation phase -- back to basics.

"She has to relearn how to eat and swallow correctly," Stuttgen explained. She said Emma's speech gets better every day.

A road marked by white paint spilled from her car the day of the crash, haunts Stuttgen every time she turns on her street.

"I have a lot of fear driving. Lot's of panic.It's hard to go home," she said, stressing that nothing is worth distracted driving.

Stuttgen remains hopeful she'll bring Emma back with her soon. "She just says she wants to go home. Every day: 'I wanna go home.'"

A GoFundMe page has been started to help relieve the Stuttgen's family medical bill burden. You can access that page here.