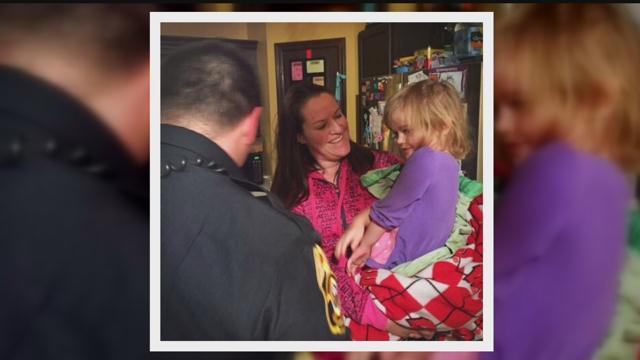 It's been a busy holiday weekend for Waukesha police officers but they still were able to make time for one special invitation.

A four-year-old girl (with her parents help) let third shift Waukesha officers know that they could stop by their home anytime on Thanksgiving meal.

A line of squad cars took her up on the offer on Friday and pictures of the meeting have been shared thousands of times on Facebook already.

4-year-old Lily Orlowski's coloring matches her four-year-old energy: it's all over the place. But her mom, Heather Orlowski, said Lily got both focused on and excited for having police officers over for turkey.

"We did let her know. She had actually spent a couple days coloring all the pictures of the police dog," Heather said.

"She had gotten all ready and then she stood in the window and waited for a better part of six hours or so," Heather said.

"We tried to explain it the best we could and she just kept waiting. She didn't want to give up so she just kept saying - every time a car would come down the street - 'They're here, They're here!'"

"I had to eat mashed potatoes and just a roll," Lily said.

...until the sun started to peek out.

"6:30 a.m. I got a phonecall and there was no caller id. I just answered the phone," Heather said.

"She's like 'Well, there's a police officer outside that wants to talk to her'. And I said 'Okay, I'll get her up. We'll be outside in a minute'," Heather said.

"Police officers waked us up," Lily said. "There were six."

"They had cookies and bags of toys and stuffed animals and t-shirts and coffee mugs. And I had a daughter who went from being depressed to being completely grinning from ear-to-ear. Just back to Lily," Heather said.

Officers even signed a thank you card which Heather Orlowski said is funny because they were the ones who were trying to thank the officers.

The family (including Lily) is already thinking up how to repay the favor to officers during the next holiday: Christmas.