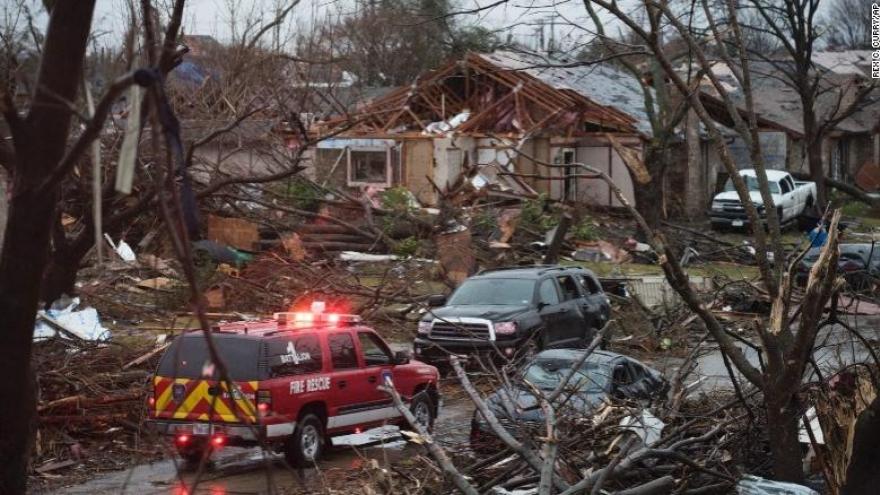 (CNN)A mammoth storm system engulfing much of the United States has claimed 24 lives, including four soldiers in Missouri. And it's not over yet.

The rash of severe weather has spawned deadly tornadoes in Texas, intense flooding in the Midwest and blizzard conditions in New Mexico.

"The storm system will gradually pull away by Tuesday, but flooding and treacherous travel could (linger) into midweek," the National Weather Service said.

There have been about 43 weather-related deaths in the past week across the country, with the current storm severe storm system blamed for 24.

The 24 deaths include 11 in the Dallas area, eight in Missouri and five in southern Illinois.Intense rain and flooding are expected across much of the state Monday, along with snow and freezing rain in the northern part of Missouri.

Authorities found their car several hundred yards from the road, entangled in some brush, the sheriff's department said.

Two soldiers found in the car Saturday night had drowned. The bodies of the other two soldiers were found Sunday morning.

"The possibility of a fifth occupant of the car exists, since an acquaintance of the above men is still missing," the sheriff's office said.

The names and nationalities of the four soldiers have not been released.

Two other people in Pulaski County also drowned when their car drove onto a flooded road and was also swept several hundred yards away, authorities said.

"Streams turn into rivers, and people sometimes don't see the road has flooded over when they are driving at night," he said.Dallas-area residents trying to recover from a spate of deadly tornadoes will get hit with snow and near-freezing temperatures Monday.

The high temperature in Dallas on Saturday was 82 degrees, which plummeted to 41 degrees on Sunday and will drop into the 30s on Monday.The area is already grappling with the effects of several tornadoes, including a twister in Garland that killed eight people.

Cars that had been in driveways ended up inside homes. At least one car flipped and landed upside down near a highway overpass.Other tornadoes touched down in nearby Collin and Rockwall counties. At least three people were killed by the storm in Collin County, the sheriff's office said.The National Weather Service has issued winter storm or flood warnings for much of Illinois on Monday.

As in Missouri, several people died over the weekend in Illinois when a motorist tried to drive over a flooded roadway.

Three adults and two children died after their car was swept into a creek in Marion County, Coroner Troy Cannon said.Parts of eastern New Mexico and the Texas and Oklahoma panhandles are under a blizzard warning through Monday evening.

Those areas could get walloped with more than 8 inches of snow, with possible snowdrifts higher than 6 feet, the National Weather Service said.

Already, parts of New Mexico have seen more than 16 inches of snow fall, with drifts as high as 8 feet. That made roads impassable in several counties, Gov. Susana Martinez's office said.

In response to the snowstorm, the governor declared a state of emergency.