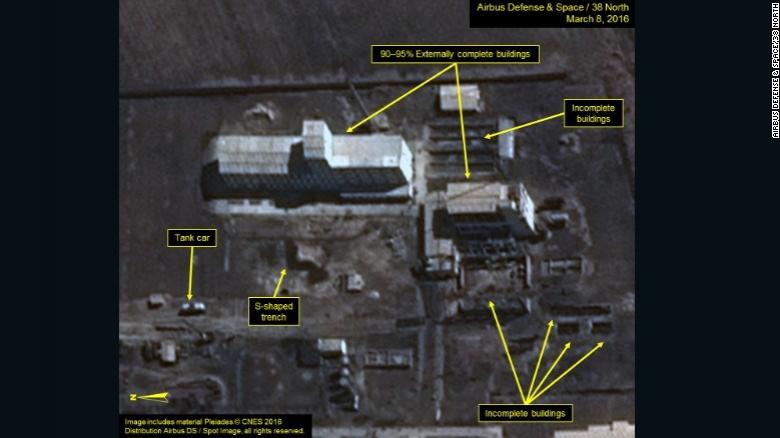 Plumes of exhaust steam, a byproduct of heating the main plant at the Yongbyon Radiochemical Laboratory complex, have been seen in commercial satellite images taken March 12 and over the preceding five weeks, the group says.

This activity is unusual, the report by the Washington, D.C.-based project, says.

"Exhaust plumes have rarely been seen there and none have been observed on any examined imagery this past winter," the report says.

"The plumes suggest that the operators of the reprocessing facility are heating their buildings, perhaps indicating that some significant activity is being undertaken, or will be in the near future."The plumes of steam do not necessarily indicate that the process for refining plutonium for nuclear weapons is underway or will be soon, the report says.

It does, however, note that U.S. Director of National Intelligence James Clapper recently testified that Pyongyang had "announced its intention to 'refurbish and restart' its nuclear facilities," including the uranium enrichment facility at Yongbyon and that it could be able to recover plutonium from the reactor's spent fuel "within a matter of weeks to months."

Separate images appear to show further work on the site's Experimental Light Water Reactor (ELWR), a key facility for the enrichment of nuclear fuel, is ongoing, with a new transformer yard and road built, and the installation of electrical cables completed.The report states that "slow, steady progress" is being made on this component of Pyongyang's nuclear project.

Construction of new buildings near the Uranium Enrichment Complex is also ongoing, with some buildings nearing completion and new projects started. While there is speculation as to the purpose of these new buildings, the report says evidence is insufficient to reach any firm conclusions.Evidence of activity at the plant's smaller, 5 MWe reactor has also been observed, but this part of the facility does not appear to be operational as exhaust steam from the cooling tower has not been noted.South Korean officials said they were aware of the report. "We are looking into... and closely monitoring the situation," South Korean Defense Ministry spokesman Moon Sang-gyun said during a regular press conference Tuesday.

Earlier in 2016 the think tank reported "slow progress" at the ELWR.

In January, North Korea announced what it said was a successful test of a hydrogen weapon, and more recently claimed that it had miniaturized warheads.

In recent months it has also fired a number of missiles, along with the launch of what it said was a satellite launch, but which many observers believe could be used as an Intercontinental Ballistic Missile (ICBM).