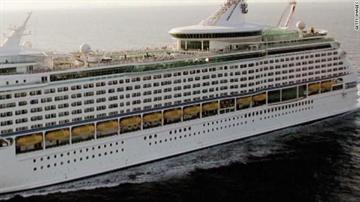 (CNN) -- More than 300 people on a Royal Caribbean cruise ship have become ill during a voyage, the Centers for Disease Control said on its website.

According to the statement, 281 of the 3,050 passengers and 22 of 1,165 crew members of Explorer of the Seas reported vomiting and diarrhea.

In a statement to CNN, Royal Caribbean International said those who fell sick have responded well to over-the-counter medication being administered on board the ship.

Janet Diaz, spokesperson for Royal Caribbean International, told CNN that the ship skipped a planned stop in Haiti on Saturday and sailed directly to San Juan, Puerto Rico, where it underwent an extensive sanitizing.

The agency said the cause of the illness was unknown.

Diaz told CNN the use of special cleaning products designed to kill norovirus will continue to be used throughout the voyage. All responses are being coordinated closely with the CDC, she said.

Noroviruses spread easily and are a common cause of gastroenteritis, which produces vomiting and diarrhea, according to the CDC.

A CDC health officer and epidemiologist will board the ship in St. Thomas, U.S. Virgin Islands, on Sunday to conduct an investigation, a health assessment and evaluate the response, the CDC release said.

Explorer of the Seas left Cape Liberty, New Jersey, on January 21 and is scheduled to make stops in St. Thomas and St. Maarten.