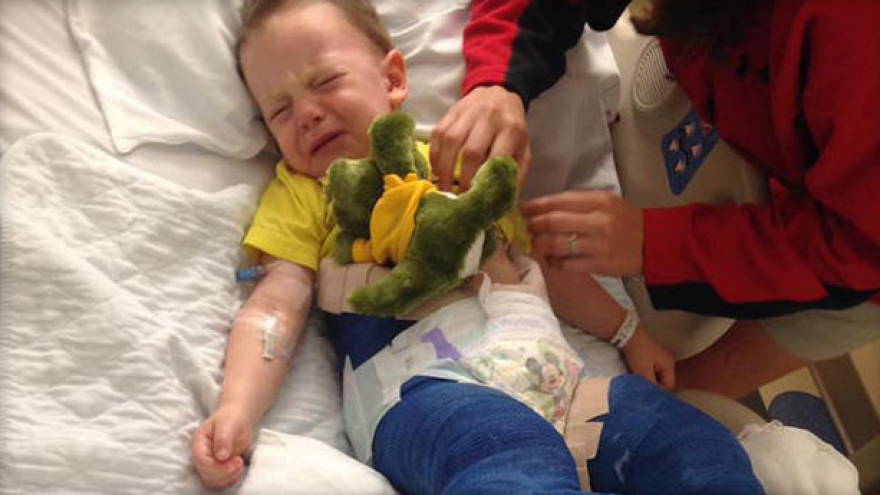 MIAMI -- A 3-year-old Florida boy is in a cast from the waist down for an injury suffered while jumping at a trampoline park.

The case has circulated nationally on social media and raised questions about age restrictions for trampolines.

Kaitlin Hill said Tuesday her son Colton broke his thigh bone late last month while bouncing on a trampoline at an indoor park in Tampa that promoted toddler use. She says the orthopedic surgeon told them the repetitive pressure from jumping may have caused the fracture.

Hill's Facebook post warning other families not to allow their toddlers on trampolines has been shared more than 235,000 times.

"Our lives have been turned upside down since Colton's accident and every day is a struggle for his sweet 3 year old self as he adjusts to life in a hip spica cast for the next 6 weeks," she writes. "... We hope by sharing his story it will prevent a child and their family from experiencing the trauma and heartbreak associated with trampoline injuries in young children."

The American Academy of Orthopedic Surgeons says children younger than 6 years old should not be allowed on trampolines.

Most of the injuries were leg injuries, including strains and fractures, but some of the more serious injuries included two spinal cord injuries, a skull fracture, and open fractures.

The American Academy of Pediatrics recommends against recreational trampoline use by children altogether. But for those who do jump, the group advises a number of safety precautions, including constant adult supervision, protective padding on and around the trampoline, avoiding flips and somersaults, and allowing just one jumper on the trampoline at a time.