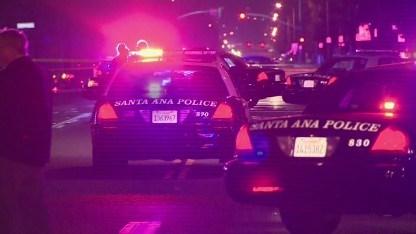 (CNN) -- A speeding vehicle struck and killed three girls, including twins, who were trick-or-treating in California, authorities said.

The girls, all 13, were in costume and carrying bags of candy in a residential area in Santa Ana.

They had the right of way at a crosswalk near an elementary school when a car hit them Friday night and sped off, according to the Santa Ana Police Department.

All the girls were declared dead at the scene, CNN affiliate KABC reported. Authorities have not identified them pending notification of next of kin.

Witnesses said the driver was speeding, and police are searching for two male suspects who fled on foot, the affiliate said. The vehicle, a Honda CRV, was found nearby.

\"We do have a witness that followed the vehicle for a short period of time and eventually led us to where the vehicle is parked now,\" Santa Ana Police Chief Carlos Rojas told KABC.

Halloween is one of the deadliest nights of the year because of the high number of drunken drivers and pedestrians on the road, according to the National Highway Traffic Safety Administration.

Two years ago, 48% of all crash fatalities during Halloween involved a drunken driver, compared with 31% on an average day in the same year, according to the agency's most recent data.