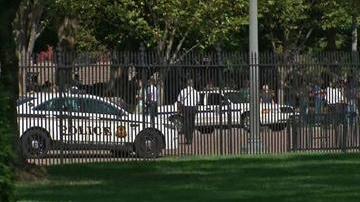 WASHINGTON (CNN) -- In the second security incident at the White House in as many days, an individual failed to stop at the entrance to the White House complex while driving his vehicle, Secret Service spokesman Brian Leary said.

The man, identified as Kevin Carr of Shamong, New Jersey, was arrested and charged with unlawful entry, Leary said. According to Leary, Carr is either 18 or 19 years old.

The incident happened at the entrance at 15th and E Streets, where the driver did not stop when the Secret Service ordered him to do so, Leary said.

The man's car did not hit the barriers at the entrance, and he then exited the vehicle, Leary said.

Carr was arrested after he refused to leave, Leary said.

On Friday night, a man who jumped the fence at the White House made it through the North Portico doors into the building before he was captured, the Secret Service said.

On Saturday, the Secret Service said it would interview personnel and review policies and security procedures following the fence-jumping incident.

\"The President has full confidence in the Secret Service and is grateful to the men and women who day in and day out protect himself, his family and the White House,\" White House spokesman Frank Benenati said. \"The Secret Service is in the process of conducting a thorough review of the event on Friday evening and we are certain it will be done with the same professionalism and commitment to duty that we and the American people expect (from) USSS.\"