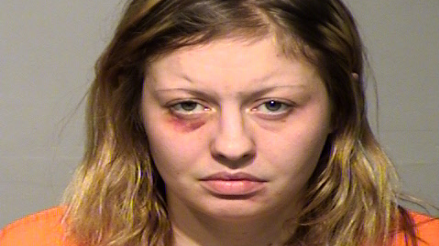 WEST ALLIS - 28-year-old Brittany Baier has now been charged with 1st-Degree Intentional Homicide and Possession of a Firearm by a Felon following the shooting death of Terrance Tucker.

On December 23rd, Tucker's mom reported to West Allis Police that she believed her son was missing from the home that he shared with his girlfriend, Brittany Baier, and their 1-year-old son. Shortly before police went to check out their residence in the 2500 block of S.88th St, Baier called and also reported Tucker missing. She stated she was in Oshkosh and was in the process of driving back home to meet police at the residence.

When officers arrived on the scene, Baier was outside and told police that Tucker was in the house dead and that an intruder had killed Tucker and assaulted her.

Police entered the house and found a body tied up with electric extension cords on the stairway leading to the basement. The body, later identified as Tucker, had been dead for a period of time.

An autopsy performed revealed that Tucker died from multiple gunshot wounds to the head.

Baier originally denied being involved in the killing, blaming it on the intruder, but then changed her story. She admitted to shooting Tucker around 5 a.m. on December 21st. Baier said that in the hours leading up to the shooting the two were arguing and the decedent beat her. Later, when Tucker was laying on the basement couch with his gun near his head, she picked up the gun and shot him in the back of the head several times.

Baier will be in court on January 5th for her preliminary hearing. If convicted of first-degree intentional homicide, she faces life in prison.