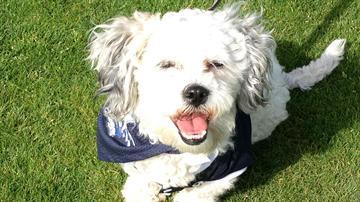 ARIZONA -- Spring training has gone to the dogs! Hank wandered into Brewers camp in Phoenix several days ago, and he's been a star ever since.

Team staffers have taken Hank everywhere (including a local vet), and he has embraced all the attention of being the team's new unofficial mascot.

Hank is named for all-time baseball great Hank Aaron, who ended his career with the Brewers in the 1970s.