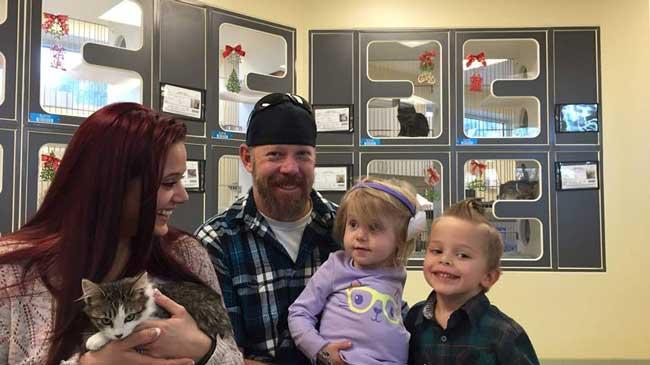 Scarlette Tipton, a 2-year-old girl from California, instantly bonded in a unique way with a kitten she received as a Christmas present, according to the Riverside County Animal Services Center.

Matt and Simone Tipton, an Orange County couple, have a 2-year-old daughter who was born with a rare form of cancer that ultimately led to an amputation. Scarlette was just 10 months old in October 2014 when her left arm was removed.

She is in recovery mode to this day, but her parents have been told she is cancer free.

As part of her ongoing journey of recovery, Scarlette’s parents searched for a kitten for her. But not just any kitten. They specifically sought out a kitten that had to have an amputation surgery too.

They found their little miracle in Holly, a kitten, who survived of a traumatic injury earlier this month.

When Scarlette first met the 3-month-old, gray-and-white Holly, she told her mother, “owie,” pointing to the kitten’s injury.

“Yes, an owie. Just like you. But she’s OK – just like you are too,” responded her mother.

The kitten was possibly caught up in a fan belt of a car engine.

Two women in Perris, Edith Rios and her daughter-in-law, Kelley Gonzalez, spotted Holly bleeding next to some shrubs, the kitten would have likely died. The women rushed the kitten to Riverside County’s San Jacinto Valley Animal Campus in San Jacinto on Dec. 17.

Holly eventual had to have her  right front leg amputated.

She has been monitored daily and appears to have made a great recovery.

Last week, Riverside County Animal Services put out a news release about Holly’s traumatic event and recovery and the story was picked up by several media outlets. The Tiptons got word of the story and drove to the San Jacinto Valley Animal Campus on Christmas Eve to adopt Holly. Although the family could not take her home that day, the shelter employees told the Tiptons that Holly was all theirs – as soon as she fully recovered from the surgery.

For more about Scarlette’s journey of survival, please visit the Facebook page her parents started on her behalf, titled Smiles for Scarlette:https://www.facebook.com/smilesforscarlette/?fref=ts