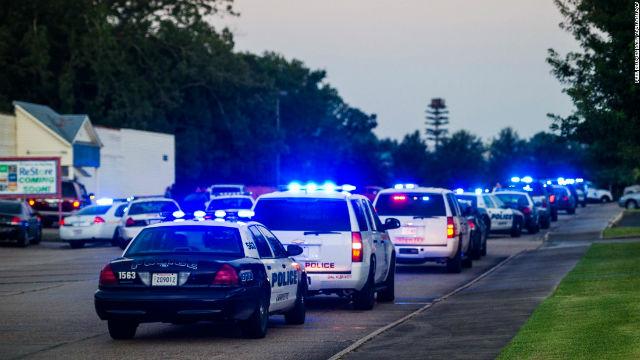 As the previews ended and the lights dimmed for the screening of the comedy \"Trainwreck,\" a man stood up inside a Louisiana movie theater, pulled out a handgun and began firing indiscriminately.

The shooter, a 58-year-old white man, killed two people and wounded nine others at the Lafayette multiplex Thursday night before he turned his gun on himself and took his own life, police said.

The shooting comes within days of the guilty verdict in the Aurora, Colorado, theater massacre.

\"There's nothing to believe that there was any kind of motive,\" said Col. Michael Edmonson of the Louisiana State Police.

Authorities have the gunman's name but are withholding it as the investigation continues.

\"We want to talk to the (victims') families first and let them know what happened,\" Edmonson said. \"We owe them that respect.\"

The witnesses: 'Gunshots after gunshots'

Jalen Fernell was in a theater next door.

\"I almost thought it was part of the movie at first,\" Fernell said of the gunshots.

An alarm went off, followed by an overhead intercom message asking patrons to get out.

\"Immediately we get terrified because they are telling us to head out to vehicles,\" he said. \"It was kind of like a war going on ... gunshots after gunshots.\"

Paige Bearb, another witness, said she took off running when the alarm sounded.

The auditorium: 'The guy was just kind of at ease'

A man who'd gone to see \"Trainwreck\" told Keifer Sanders, who was in a nearby auditorium, it was quiet when the gunfire began right before the movie's started.

\"There was no argument, nothing going on at all. And a guy just stood up and started opening fire,\" Sanders said. \"The guy was just kind of at ease, just standing there, just shooting.\"

\"He bought a ticket and went into the theater. And sometime during the movie, he started shooting,\" he said.

When the bullets flew, one shielded the other and may have saved her life.

\"Her friend literally jumped over her,\" said Louisiana Gov. Bobby Jindal, after speaking with the unnamed teacher. \"If her friend hadn't done that, she believed the bullet would have hit her in the head.\"

A bullet struck her leg instead, but she managed to get to a fire alarm and pull it.

\"When you think about it -- two friends together -- one jumps in the way of a bullet to save her friend's life,\" said Jindal from the scene of the shooting. \"The other, even though she was shot in the leg, she had the presence of mind to pull the fire alarm and in the process saved other people's lives.\"

The victims: 'Awful night for the United States'

By the time four officers entered the theater, the gunman was dead.

\"It appears the shooter died from a self inflicted gunshot wound after discharging his weapon numerous times,\" Craft said.

The nine injured range in age from late teens to \"probably into the 60s,\" Craft said. One victim has been released; another is in surgery and is \"not doing well,\" he said early Friday morning.

Bomb squads conducted a sweep of the theater and the parking lot. Police temporarily closed a nearby Grand theater and deployed officers to other movie houses as a precaution.

\"Whenever we hear about these senseless acts of violence, it makes us both furious and sad at the same time,\" Jindal said.

The theater: 'My heart is broken'

The shooting occurred six days after the conviction of James Holmes in the Aurora, Colorado, theater shooting that left 12 people dead and 70 people wounded.

On July 20, 2012, Holmes opened fire during a screening of \"The Dark Knight Rises\" using an AR-15 rifle, a 12-gauge shotgun and at least one .40 caliber handgun. The rampage ended with the once-promising neuroscience student's arrest outside the theater.

Security measures were stepped up at some cinemas after Aurora. Still, theaters across the United States fundamentally remain freewheeling places, where ticket-holders can wander in and out, unbothered by the intense security measures that now typify airports and public buildings. Ticket sales also didn't slump.

Southern Theatres, a New Orleans-based theater chain which owns The Grand, had no immediate comment about the Thursday night shooting. Universal, the distributor of \"Trainwreck,\" declined to comment.

But the movie's star, Amy Schumer, tweeted, \"My heart is broken and all my thoughts and prayers are with everyone in Louisiana.\"

The shooter: 'We may now never know'

While the shooter may have taken his motive with him with his death, the investigation is far from complete. Authorities will painstakingly pore over his digital footprint, talk to his family and friends, and retrace his movements to answer the burning question: Why?

\"This kind of stuff just leaves you wondering,\" said Craft, the Lafayette police chief. \"Why would a guy come into a theater in this city -- we have a relatively safe city -- and just, you know, randomly start shooting people? It's hard to figure out. He's deceased, so we may now never know.\"

The gunman had a criminal history but it dates back several years, Craft said. He didn't elaborate further.

Authorities will also put together a profile on the shooter, search his house and trace the gun, said CNN legal analyst Sunny Hostin.

\"We can hug these families. We can shower them with love, thoughts and prayers.\"