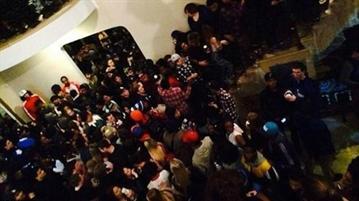 An Ontario teen hosted a party at his parent's mansion that was still under construction. The party was talked about on Twitter by teens using the hashtag #Mansion Party. According to reports from TheRecord.com, police received a complaint at 9:30 p.m. from a neighbor.

A 16-year-old who attended to party said the scene was chaotic when he arrived, and described seeing a tour bus filled with partiers in line with several cars. Some people were climbing ladders, and smashing windows. The teenager says people just wanted to get inside.

TheDailyMail reports the parents of the 17-year-old who threw the party said, \"I told my son he could have some friends over.\"

The partying teenagers did $70,000 in damage to the Ontario mansion.